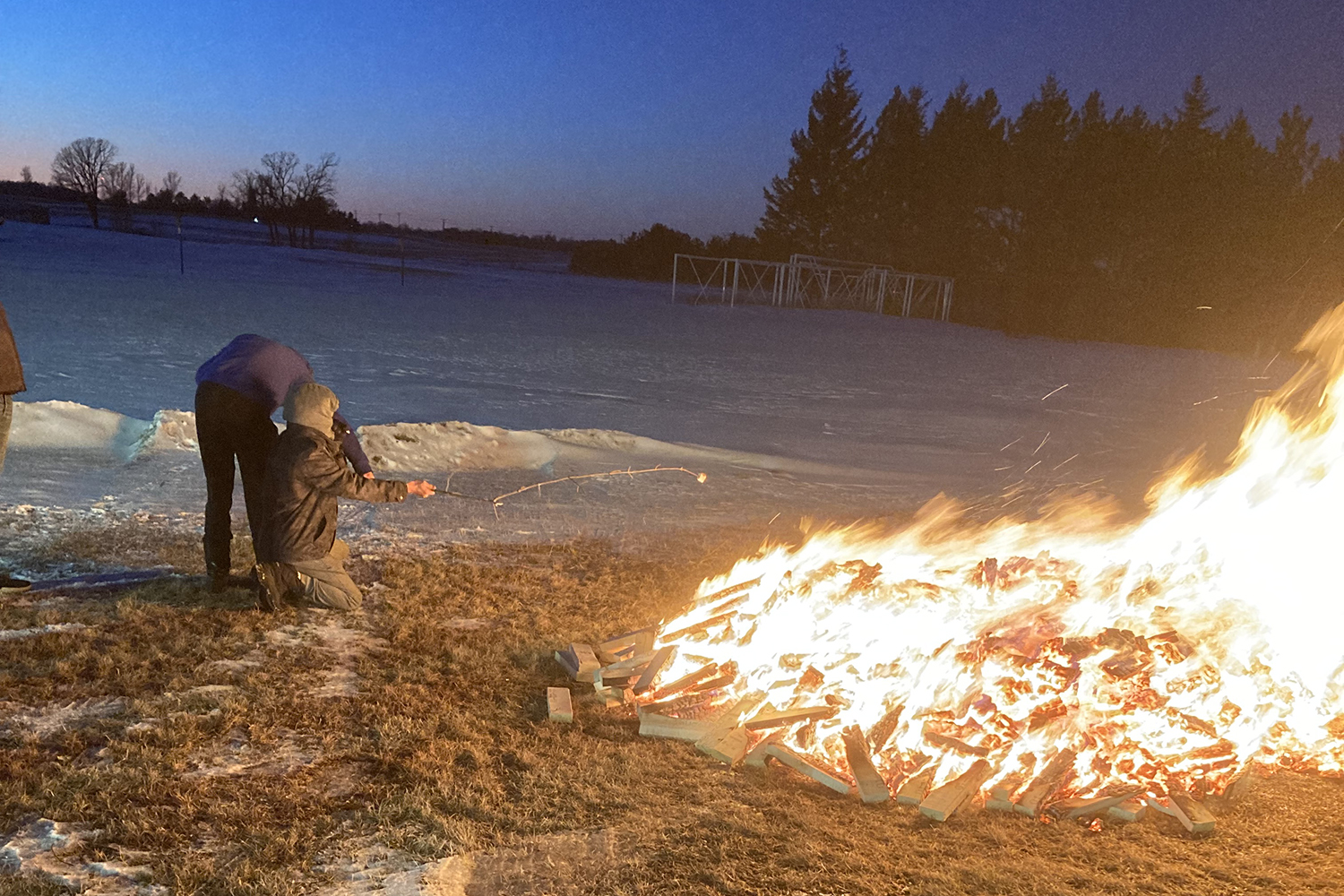 Loooong sticks were required to roast marshmallows at the Jensen Center bonfires February 26.

In a cave in France, two early men, Cro-Magnons if you will, were sitting by a fire. Lothar, who had a small spattering of grease dripping down his massive face, looked over at Gumbas and said profoundly, “Fire good.”

Even then, some 70,000 years ago, the early hominids had it figured out. “Dis buffalo rump tender and fun to chew. Fire cook good.”

Other members of the tribe gathered around the fire, moving more closely.

Mauba the patriarch of the tribe sidled up to Lothar and said, “Tell story about mammoth almost take you for lunch.”

“I like stories around fire even if fake news,” said a snot-nosed teenager as he fiddled with his small ivory carving and at the same time took notice of Gumbas’ 12-year-old daughter. This activity for Yaysha, the teen, was comforting and he, like the others, knew the communal value of the fire there in their luxurious cave. Unknowingly, like the Neanderthals of the same region, they were imbedding in their developing genetic package the incredibly important instinctive attraction to fire.

“Fire even keepd saber-toothed cats away from my girlfriend. Just hate it when tiger got Dansolla.”

So there you go, tucked away in our DNA there seems, from my amateur evolutionary biologist point of view, the theory that fire has a natural attraction that goes all the way back to Lothar and Gumbas the Cro-Magnons—and no doubt way before that.

For years, we have watched the grandkid and other children build fires at every opportunity, even in the middle of snowstorms. No sooner is there an open fire when every passing individual will gather around seeking to warm themselves or possibly push some food, be it a marshmallow or a fat steak, into or over an open fire. The open fire simply has a magic, and it’s not just in youth but in everyone, it would seem.

It can be a small fire or a roaring bonfire as we recently experienced in the late February winter wind behind the Jensen Community Center, the one sponsored and advertised as a way of driving away the winter and bringing the community together. Various groups arrived and almost to the person, individuals slowly rotated themselves like vertical rotisseries around the fire all the while marveling at the radiant heat. There was even a brave individual, who obviously in his best paleo throwback effort, attempted to inflame a marshmallow, then dashed back to chocolate and graham crackers.

At a safe distance from the inferno, the toils of winter, the insidious plague, and lack of social involvement was bantered about as would be expected around any open fire. There were others, like children, who just stared at the flames looking for imagined dancers, maybe answers, maybe just wanting to feel heat in a way they hope will linger. I’m sure there were others sent dreaming of a medium-rare steak much like Lothar back a few generations. There was a sense of security and of community associated with the open fire.

Were any of us more comfortable because we knew none of those sneaking saber-toothed tigers were being kept at bay? Maybe.

No boogie men out here; mostly it was just a gathering of the tribes exercising the call of our DNA, the same as the call of the open fire and all that it offered all those thousands of years ago. It was a good call then, and it is still a good call today.

I found myself contemplating fire, maybe while feeling all that heat and realizing, wondering, if it was a setting like this that set off humans on their great adventure of really using fire. The intense energy possibly triggered innovations that have travelled with us in these more modern times. Did we confine the fire in a structure for greater warmth? Did we imagine that one day by burning a barrel of oil, we could accomplish the labor of one person working for almost five years?

It almost seems strange that we could go from seeking simple comfort and community, making foods more available and palatable, and warding off predators with the innovation and application of the simple open flame to, in just a few thousand years, take over the world with all that energy of the flames from oil.