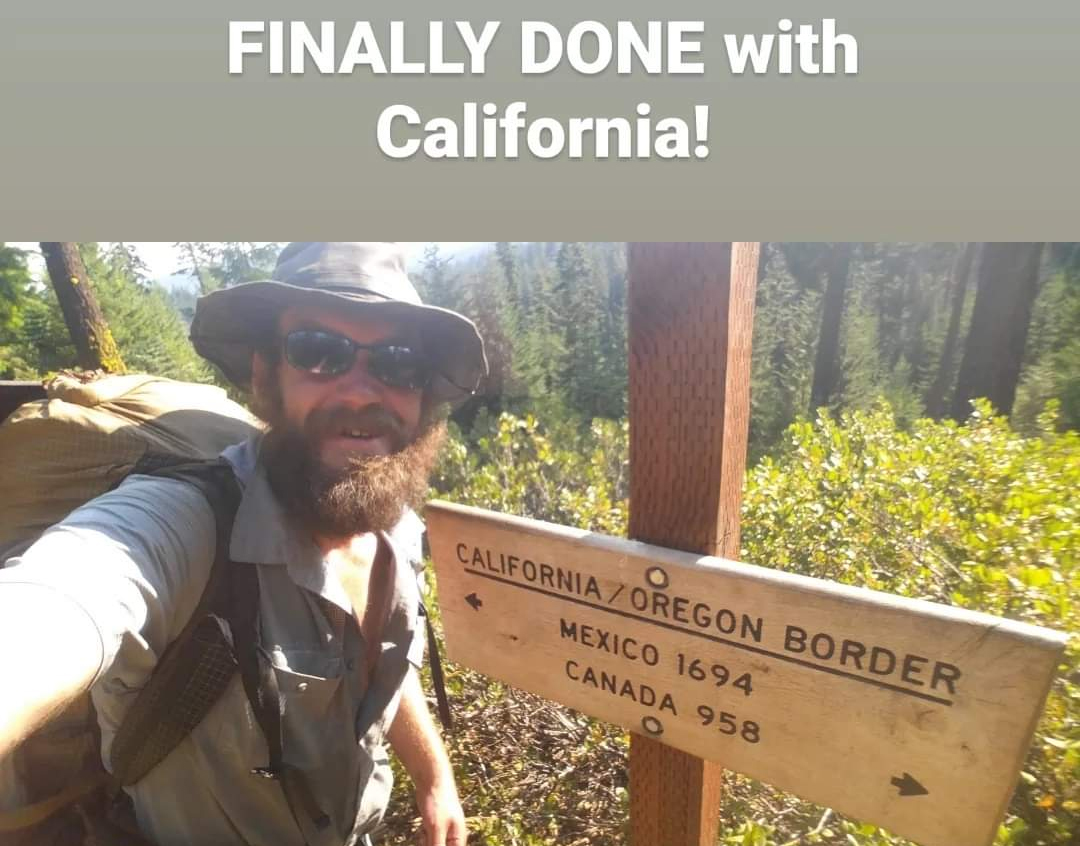 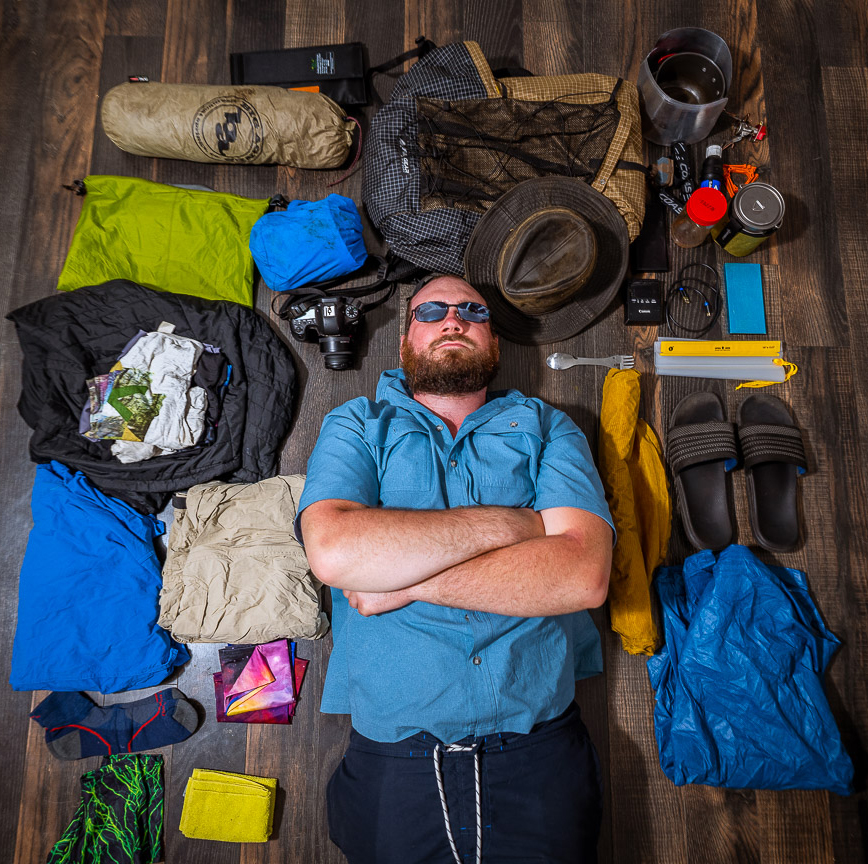 Jamie Docka surrounded by some of his trail gear.

Trekking the PCT is a dream for many. The trail winds 2,653 miles through California, Oregon, and Washington from a trailhead near the Mexican border at Campo, California, and ending at the Canadian border near Manning Provincial Park. It follows the highest parts of the Cascade and Sierra Nevada Mountains about 100 to 150 miles inland of the Pacific Ocean. PCT elevation ranges from near sea level to more than 13,000 feet, with a total vertical of over 400,000 feet. Along the way, it traverses desert, forest, rivers, mountains, 25 national forests, and seven national parks.

Olson, 38, son of Mark and Maxine, established a record Fastest Known Time for a “Supported” PCT run of 51 days, 16 hours, and 55 minutes. “Supported” means receiving food and gear supplies from a crew of family and friends. If you’re doing the math in your head right now, that means averaging more than 51 miles per day, or about two marathons or 10 River Runs.

Docka, 25, son of Jim and Danita, is trekking the PCT in a self-supported style, which means backpacking his gear and food and receiving resupplies at towns along the way. Jamie is known as a “thru-hiker,” one who covers the entire length of an established trail end to end. He thru-hiked the Appalachian Trail (AT) in 2019.

Docka took a break from his hike in mid-August to share some thoughts with the Jensen Community Spirit. Next month, we plan to have an interview with Olson and his crew about his spectacular FKT record.

Community Spirit: Jamie, where are you today (August 12)? How’s the weather?

Docka: Mile 1,746. My last town was Ashland, Oregon. It’s hot; 107 degrees right now. The air today smells like smoke, and the visibility is down to about a quarter mile.

CS: How many days have you been out on the trail? When are you looking to complete?

Docka: I’ve been out 98 days. I started on May 6, and I’m shooting to finish in mid-September. I’m not in any terrible hurry, just need to be done before it snows.

CS: So you’re averaging about 18 miles a day?

Docka: Right. That includes when I need to go into a town every four or five days to resupply and 18 “zero” days [days without a move of camp]. Two zero days were because of bad smoke. Four were because I got giardia.

CS: So, when you’re on the trail, you’re making about 24 miles on a typical day?

Docka: Yes. That’s going to increase to about 27 miles because things flatten out in Oregon and Washington.

Docka: I get going about 6 or 6:30 a.m., fire up some coffee, and have pasta or something for breakfast. I’m packed up and on the trail at 7. I snack around 11 or so, then stop for lunch after noon.

For lunch, I have some ramen or make myself a pizza wrap out of tortillas and pepperoni and sauce. Then hit the trail again till 7 or 8 p.m.

A fair number of evenings I’m camping with others. We socialize and maybe have a beverage or two. Typically, I’ll stay up till “backpacker’s midnight”—about 9 p.m.

In the desert, things were different—hot and no shade! So around noon we would find a place to rest, maybe with some shade and water, until 4 or 5 p.m., then hike a few more hours before setting up camp.

CS: Are there many other thru-hikers with you on the trail?

Docka: Not nearly as many as on the Appalachian Trail. But here’s the thing—in front of me right now there are probably 600 people within a three-day hike. The Dixie Fire forced a detour for many thru-hikers, and that concentrated them. Some thru-hikers had to skip 200 miles of trail. I was lucky—I only had to skip 18 miles.

CS: Why have you taken up long-distance thru-hiking?

Docka: I don’t know. It’s just fun. It’s interesting how your body adapts. The trail breaks down your body and reshapes it. I’ve lost 50 lbs. My body didn’t change the same way as it did on the Appalachian Trail. There were more ups and downs on that trail, and I couldn’t average as many miles. My body adapted on that trail for the ups and downs and on this trail to cover more distance.

CS: What do you think about all day?

Docka: I open up my mind. Often I just think about random things. Things I’ve worked on in the past. Some about the future and other hikes I hope to do. I think about old friends and wonder what they are doing now.

CS: How does the AT compare with the PCT?

Docka: Easier hiking and better views here than the AT. Much of the AT it’s as if you’re in a “green tunnel” because you’re going through thick forest with few vistas. Here, there are many days where you can see for miles and miles all day.

CS: How did you plan logistics?

Docka: I really didn’t plan that much. I knew from experience what I would need for gear and the like. I prepared dinners for 150 days. That means cooking them, dehydrating them, and putting them in vacuum seal. I also made some dehydrated breakfasts. I tell my folks when and where I need food and other items, they send to a local post office, and I pick things up there.

CS: Your trail name is “Gourmet.” How did you get that?

Docka: On the Appalachian Trail, I helped out some thru-hikers who had their food stolen by a black bear. They were eating crummy food night after night, and so when I fed them some of my chicken casserole, they were impressed and crowned me “Gourmet.”

CS: What else are you eating?

CS: What has been the good, bad, and the ugly for you? And how about the awesome?

Docka: The good? Lots of views in the Sierras and climbing 12,000 to 13,000-foot mountains there. The people are great. And an old friend from the AT, Jelly Bean, will be coming to hike with me.

The bad? Heat. As I said, it’s 107 degrees now. I never got blisters before but now am because the heat from the sand makes your feet swell. It’s dry. I have a 20-mile hike between water stops coming up that will be tough.

The ugly? When a thru-hiker got drenched and almost went hypothermic. It was scary.

Awesome? Lightning storms in the mountains!

CS: When did you decide to do the PCT, and is it part of a greater plan for you?

Docka: I decided about halfway through the AT thru-hike. And yeah, it’s part of a bigger plan to complete the triple crown of thru-hikes—the AT, PCT, and Continental Divide Trail. I hope to do the CDT in three or four years.

CS: Do you still have your ice cream habit?

Docka: Yes. At almost every town, I stop and get a quart of ice cream and finish it on the spot.

Previous PostLady Lovin’ Her Life: What I did this summerNext Post“Paint the County!” brightens downtown Amherst and more
0Shares