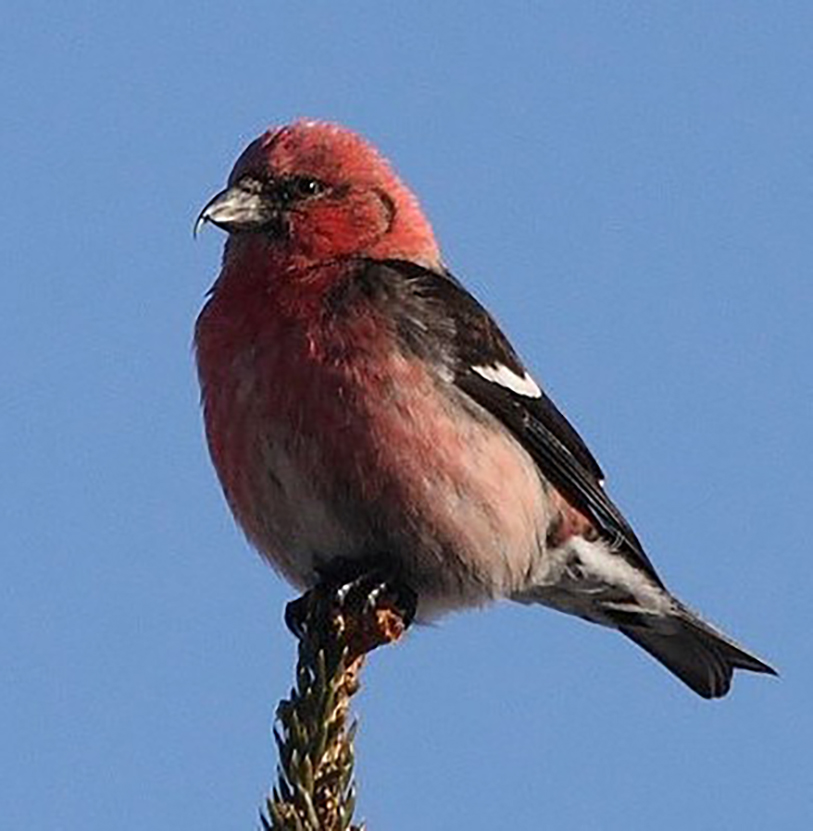 Amherst Circle Birders set new records during their 40th annual Audubon Christmas Bird Count held on December 18, 2021. Highlights included a record of 43 total species and several unusual species including the White-winged Crossbill, a winter migrant typically found in the boreal forests of Canada. With specialized crossed bills, they are perfectly adapted to pry open the cones of spruce trees for the seeds.

First held in 1980, the 2021 Amherst event was sponsored by the local Aldo Leopold chapter of the Audubon Society, which also sponsored, on the same day, another Christmas Bird Count in the Stevens Point area.

This is also the 122nd year that the National Audubon Society has held this citizen-based science and conservation program. In addition to a fun event for participants, the survey helps scientists study trends in bird populations and track related environmental influences, such as global climate change. The Christmas Bird Count, now an international event, is the longest running science project in the world. It is designed to get volunteers to annually count the birds found in designated circles on a single day in December. Last year, there were 1,842 circles, each 15 miles in diameter, scattered throughout the US.

With Amherst at the center of a 15-mile diameter circle, the Amherst count covers 177 square miles—reaching from Sunset Lake on the north to Scandinavia and Iola on the east, Custer on the west, and Spring Creek on the south. The rolling glacial topography includes a great variety of bird habitats, including the Tomorrow and Waupaca River watersheds, many small lakes and wetlands, and a diversity of woodlands, farms, and rustic roads.

The weather this year was cold, breezy, and wintery—with temperatures in the mid-20s, morning snow flurries, and a northerly wind. Much of the open ground had a light dusting of snow, while shaded areas had deeper snow. Ponds and lakes were ice covered, but many of the rivers and streams were open. Although lakes were frozen, we saw a moderate number of waterfowl (685 Canada Geese and 49 Mallards).

Amherst Circle Results Compiler Eric Anderson said, “We counted 5,266 birds, which was higher than our 10-year average of 4084. We also set a record this year for seeing the greatest number of species at 43, compared to our previous record of 40.

“We had several unusual sightings this year. White-winged Crossbills were observed by Bob Henke for the first time ever on the Amherst count. We also had sightings of a common grackle and herring gull that have only been reported twice before and golden-crowned kinglets only seen in three previous counts. We also set several records for the highest numbers of individuals of a species ever seen. We saw more red-bellied woodpeckers, pileated woodpeckers, and cardinals than in any other year.”

Most other species were seen in their usual numbers, as the tally below shows.

Anderson added, “Why so many species this year? The answer at least partially lies in the amount of open water available to hold open-water-dependent birds. Hence the Canada Geese, Mallards, Blue Heron, Belted Kingfisher, and probably Herring Gulls would not have been seen if everything was iced up.

“However, we’ve had ice-free counts before without setting records.

“Another reason we saw so many species this year might be explained by the old ecological adage that ‘Commonness is rare, and rarity is common.’ Simply put, most species in an ecosystem are only represented by a few individuals, while only a few species occur in high numbers.

“There are lots of rare birds we miss every year on the bird count even though they are present. It is because they are rare that makes them hard to detect. Some years—due to weather conditions, intensity of searching, or just plain luck—we see more or less of those rare species. This was a ‘lucky’ year for us.”

But not as lucky as some CBC birders. Comparing the Species Diversity of the Amherst Circle to other CBC circles in the United State, Eric said that, while exciting for the counters, “43 species isn’t a very impressive diversity number. At this time last year, the most diverse circle in Texas observed 224 species in a single day!”

And this might also explain why birders enjoy traveling to Texas for part of the winter. Those counters that are snowbound in Wisconsin enjoy the company of the Chickadee, Nuthatch, and Cardinal. And, if they’re really lucky, they might see a White-winged Waxbill on a spruce tree in their own backyard.

Totals for the Amherst Circle Count

the Amherst Count this year, including:

Eric Anderson served as Compiler. Karen Dostal and Joe Passineau served as coordinators for the Amherst Circle. Results are submitted each year to the National Audubon CBC office and can be found on the CBC website.

For the first time ever, White-winged Crossbills were found on the 2021 Amherst Circle Christmas Bird Count.