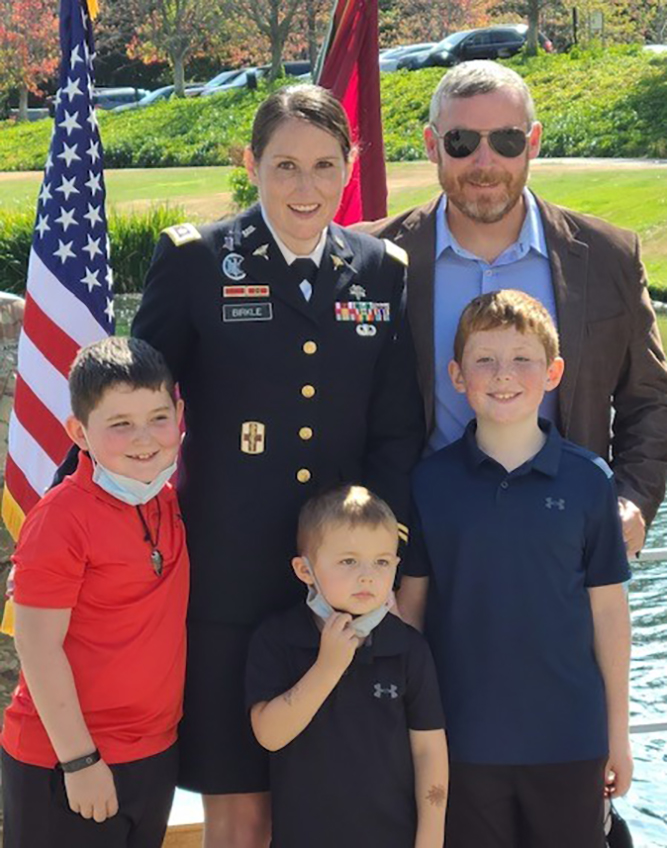 On September 7, 2021, a ceremony was held at Joint Base Lewis-McChord (JBLM), Washington, in which Army Major Amber M. Birkle was promoted to Lieutenant Colonel. Birkle, the daughter of Michael and Julianne Juris, hails from Amherst and is a graduate of Amherst High School. She is married to retired Major Jason Birkle and has three children: Spencer, Elliot, and Tyler. Currently living in Olympia, Washington, the family will move to Fort Campbell, Kentucky, in 2022, where Birkle will command the 586th Field Hospital.

Birkle attended the UW-La Crosse ROTC program and received a Bachelor of Science in Nursing degree from Viterbo University in 2006, subsequently commissioning into the Army Nurse Corps. She completed a Master of Science in Nursing degree in Leadership and Health System Management at Drexel University, in Philadelphia, Pennsylvania, in 2016, and then earned a Doctorate of Nursing Practice degree from the Uniformed Services University, Bethesda, Maryland, in 2020.

She started her nursing career in the emergency department at Bassett Army Community Hospital, Fort Wainwright, Arkansas. There, she deployed in 2008-2009 with the 10th Combat Support Hospital in support of Operation Iraqi Freedom where she served in the Emergency Treatment Section of Baghdad ER.

In 2010, Birkle completed the Emergency Nurse Course and was assigned to the Emergency Department at Blanchfield Army Community Hospital at Fort Campbell. There she served as the Clinical Nurse Officer in Charge (CNOIC) of the Urgent Care Center and then as CNOIC of Byrd Combined Troop Medical Clinic.

She then went on to Weed Army Community Hospital (ACH), Fort Irwin, California, where she served in multiple positions including CNOIC of the Emergency Department, CNOIC of Primary Care/Population Health/Referral Management, and interim Chief of Primary Care.

She ended her time at Fort Irwin as Chief of Operations for Weed ACH, serving as principal advisor to the commander on all issues related to hospital and Medical Department Activity (MEDDAC) operations, training, mobilization, security, and emergency management.

From 2017-2019, Birkle was a student at the Uniformed Services University, pursuing a Doctorate in Nursing Practice as a dual certified Family and Women’s Health Nurse Practitioner.

Her final residency was completed at Fort Bragg, North Carolina, during which she also obtained a Diploma in Mountain Medicine. Over the past year, she has served as a primary care manager and the Officer in Charge of Jay Medical Home, Department of Family Medicine, Madigan Army Medical Center, JBLM, Washington.