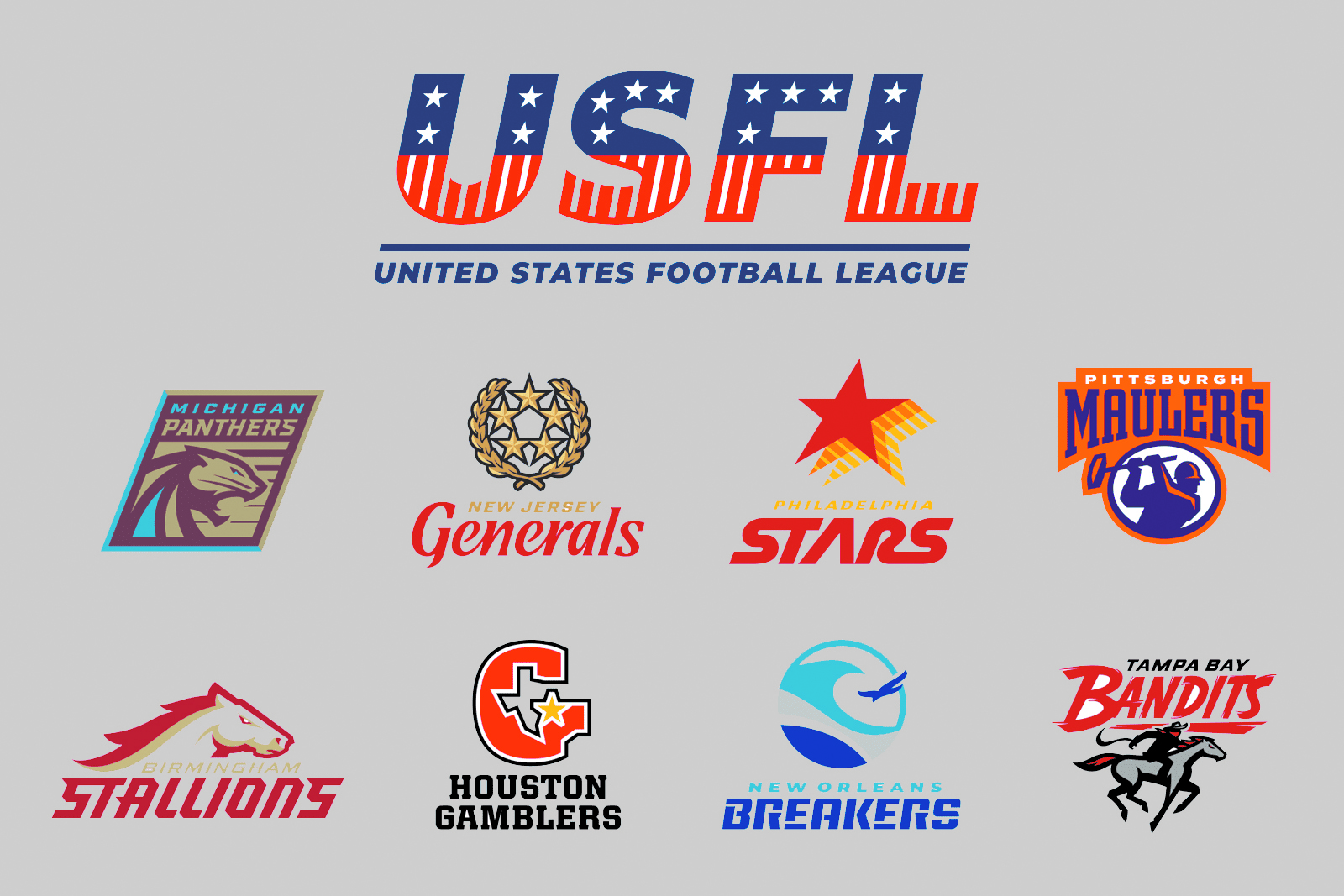 Team logos of the revived USFL.

On Super Bowl Sunday, Garrett Groshek went to Costco to load up on snacks for the big game.

There he ran into his friend and former UW-Madison teammate Jon Dietzen.

The two got to talking about the United States Football League (USFL) that was being resurrected after 37 years. Both players had stints with NFL teams last season—Groshek with the Las Vegas Raiders and Minnesota Vikings and Dietzen with the Green Bay Packers. But neither was currently on a team.

Groshek—a running back/fullback, who graduated from Amherst in 2016—didn’t know much about the new USFL. However, he was intrigued because his agent told him it could be a shot for him to play football again. The eight-team league held its two-day draft February 22 and 23.

In a whirlwind few weeks after that conversation with Dietzen, Groshek was drafted by the Pittsburgh Maulers. Coincidentally, Dietzen and fellow Wisconsin teammate Olive Sagapolu were also selected by Pittsburgh.

In another twist, the Maulers’ general manager and coach, Kirby Wilson, was Groshek’s running backs coach with the Raiders last summer. The two created a special bond.

Groshek was texting with coach Wilson in the days leading up to the draft. Groshek knew that if a team was going to select him, it was most likely going to be the Maulers.

The USFL Draft used a different format where, instead of teams drafting any player with any pick, each round had to be a specific position. The running backs/fullbacks weren’t available to be selected by teams until the 27th round. The Maulers had the eighth pick of that round.

Groshek received a text from Wilson about five minutes before it was announced on Twitter that the Maulers were picking him.

He was elated; so was Wilson.

“He’s one of those guys who, when he gets off the bus, you go, ‘I want him,’” Wilson told Fox Sports after drafting Groshek.

When Groshek went undrafted in the NFL Draft, it was Wilson who told then-Raiders coach Jon Gruden and general manager Mike Mayock he wanted Groshek in Las Vegas.

Groshek knows the Maulers selected him as a running back, but he’ll also play fullback and special teams. With only 38 players active on an USFL game-day roster, every player is critical.

“There’s not necessarily a position you can put on it,” Groshek said. “Just trying to do my part.”

In high school, Groshek was a three-year starting quarterback at Amherst, helping the Falcons win the WIAA Division 5 state championship in 2015 when he was a senior.

After the Raiders picked up Groshek as an undrafted free agent on May 1, 2021, he spent the summer with the team.

Groshek was one of the team’s final cuts at the end of August.

When Wilson selected Groshek in the USFL draft, the coach told him: “We’ve got some unfinished business to take care of.”

Groshek stuck around Las Vegas for some time after he was cut by the Raiders, waiting to see if he would get picked up by another NFL team.

“That’s been my mindset the whole time. I’ve always been ready for an opportunity, ready when the Vikings called in the middle of the season to go up there for a week and just stayed ready after that,” Groshek said.

Groshek didn’t latch onto another NFL team the rest of the season, but he stayed ready.

He moved back to Amherst where he helped Falcons football and boys’ basketball players with coaching. Groshek also spent a lot of time studying for a certified financial planner exam, which he took March 8.

With the chance again to play the sport he loves, Groshek has a new lease on his football life.

All the USFL regular-season games, which are scheduled to start April 16, will be played in Birmingham, Alabama. Groshek reported to Maulers training camp March 21.

Groshek is hoping he’ll play well enough for the Maulers to turn some heads from NFL scouts and coaches and get another shot at living out his dream.

“That’s the opportunity that the USFL presents—not just the USFL, but the XFL next year—is just the spring leads that give guys that are free agents an opportunity to get some new film out, keep developing their football as not just offseason work but being able to be in live situations and for NFL teams and organizations to be able to see that, coaches to be able to see that,” Groshek said. “It helps to show teams who you are, what you can do, what you can’t do, and allows you to make the most of the opportunity for yourself.”

Groshek will certainly make the most of his opportunities back on the football field.