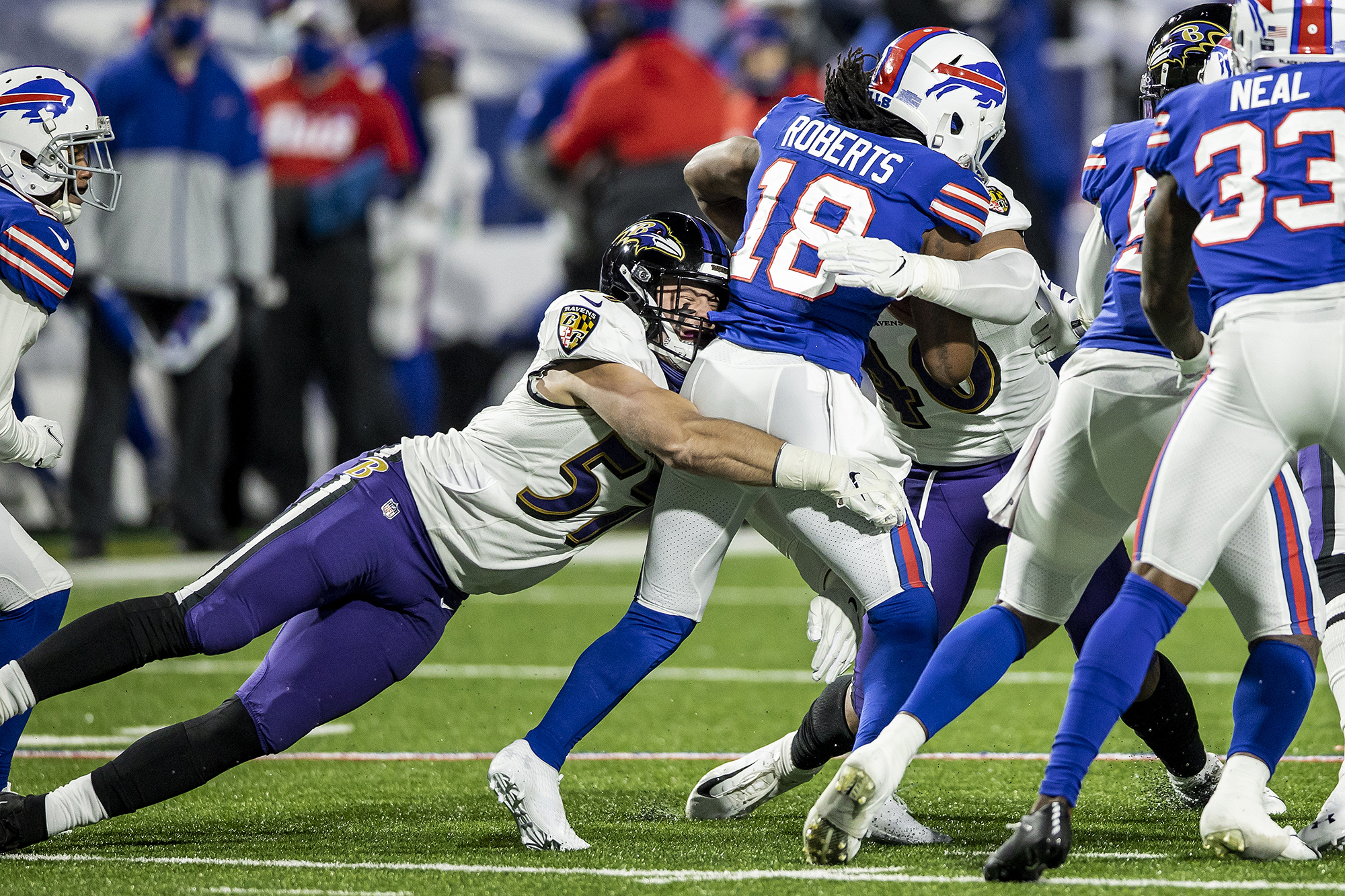 Special to the Jensen Community Spirit

It was the moment Kristian Welch had been preparing for his entire life. With the football in the air, Welch raced down the field on punt coverage with laser focus on doing his job: making the tackle. The Baltimore Ravens linebacker tracked Philadelphia Eagles returner Greg Ward and dropped him to the turf.

Welcome to the NFL, rookie.

Welch made the first tackle of his professional career in the first 11 minutes of his first game. The Iola native had made it on to the big stage.

“I’m living the dream, man,” said Welch, who was back in Iola near the end of January visiting family and friends. “I pinch myself really every day.”

Even though he wasn’t selected in last April’s NFL draft, Welch made an impact with the Ravens this year, playing in 10 regular-season games, as well as in his team’s playoff victory over the Tennessee Titans. When he was active with Baltimore, Welch started on all four phases of special teams: punt, punt return, kickoff, and kick return.

“It was the accumulation of all the work that went into it, obviously, not just in training camp; a lot of it happened back here in Iola,” Welch said. “A lot of it is going out on the field by myself, just working out as much as I could to prepare myself to be able to go out and play at the highest level in front of all those people. Obviously, my family and the folks back home here in the community, I appreciate all the support. Quick shoutout to the community and all the love they showed me, because I really do appreciate that.”

Welch had a solid training camp in the summer with the Ravens and was one of the final cuts. The next day, September 6, he was signed to Baltimore’s 16-man practice squad.

Because of COVID-19, every NFL team had an unconventional training camp. Welch, who was a standout at Iola-Scandinavia High School as well as the University of Iowa, and his fellow undrafted rookies weren’t able to fully showcase what they were capable of due to no preseason games. The Ravens took a chance on Welch, and he showed the coaches and organization how explosive and dependable he is as a player.

“Yeah, I think ultimately that’s why I played as much as I did this year,” Welch said. “I had a couple of injuries and stuff, but, yeah, I really didn’t get that opportunity at pro day to get exposed before the draft to a lot of teams. I was fortunate enough the Ravens kind of did their research and kept in contact with me, obviously, pre-draft. I’d known the history of undrafted guys in general, but also undrafted linebackers, one being our assistant coach, Zach Orr. He’s a great sort of mentor, great coach to all of us inside linebackers. He’s a prime example of someone who was undrafted, came in, and was able to make the team. He was actually All-Pro his second or third year.”

Every day, every practice, every game was a learning experience for Welch. Some veteran teammates were a calming presence and helped him settle in.

“Everybody’s bigger, everybody’s fast, but if you can play with them, you can play with anybody,” Welch said. “It kind of calmed my nerves. Once I got out there, it was great to just compete with guys that have been there for a long time. Obviously, it’s a unique season with COVID and everything. A lot of the veteran players said, ‘Man, you rookies got it tough. This is your first year in the league and you’ve got COVID to deal with and all the protocols and stipulations with all of that.’ It was a lot of fun, but, obviously, some things came with it.”

Welch didn’t dress for the Ravens’ season opener and then injured a hamstring in practice and was placed on injured reserve for three weeks. By Week 5, Welch was healthy and back on the practice squad. The following week, he was activated to the 53-man roster. He was one of 48 Ravens to dress for the Eagles game—in non-COVID seasons, only 46 players per team are active for games.

Welch felt it was only a matter of time until he would get a chance to compete in his first NFL game.

“In training camp, I had kind of shown what I could do; this was before the hamstring injury. But I had a pretty good training camp, and I felt pretty good about my chances going into the season,” Welch said. “I didn’t make the final cut and was placed on the practice squad. I guess I’m just theoretically thinking without the injury, I thought there was a really good chance I would be playing early in the season—just based off how I played, how I fit in, and how the coaches trusted in me and such. After the injury happened, I had to come back healthy for the Eagles game. So, I never really thought I wouldn’t ever play throughout the season.

“My mindset was always, when I get the opportunity to play, I’ll be ready. I had the confidence in myself and I know the coaches had the confidence in me to be able to go out and play special teams and fit in wherever they put me. They can put me in whatever position they think that specific week for game planning reasons or whatever. In my mind, I was going to be open and stay ready—go to contribute whenever the opportunity came.”

Welch was primed for that first game, and he delivered. He played in the next seven contests after that initial game.

During the Ravens’ game against the Cleveland Browns on December 14, Welch got rolled up on and his left foot was torqued in a weird way. He was inactive for the next game but then played in the final two games of the regular season. In the finale against the Cincinnati Bengals, the Ravens had a big lead when Welch was inserted at inside linebacker. It was his first career game action on defense.

Another thrill came for Welch one week later when the #5-seeded Ravens knocked off the #4-seeded Titans 20-13 in an AFC wild-card playoff game.

Welch finished Year 1 with five tackles—all on special teams—three of which were solo.

He always felt comfortable out on the field, especially when he was getting playing time frequently during his stretch of being on the active roster 10 out of 11 games.

“Iowa definitely prepared me for the types of meetings we would go through in the NFL,” Welch said. “In Baltimore, the Ravens organization, the coaches, do a great job preparing us and game planning. You’ve got to put the time in. I was ready for the mental side of things, so I got more comfortable as the year went on. Being able to understand the scheme and how you can sort of give yourself an edge in watching the guy you’re going to be blocking or watching the guy that’s going to be blocking you or the punt return team. A lot of it comes down to what you can do to prepare, and then you just really trust your fundamentals and your technique going on from that.”

Welch said he feels as if his first season was such a learning experience in all facets of the game. It will prepare him for Year 2.

“I think it really just gives me more confidence,” Welch said. “Like I said earlier, it’s just football, but the speed is different. Guys are obviously all strong, all have insane skill sets. But me being able to go out there and compete with the best really just gives me confidence. That’s ultimately what’s important in the league as I found out—it’s being able to do more than the next guy. The more you can do, the more you can help the team win, that’s ultimately going to help the organization and keep you employed.”

Welch is spending the offseason training in Iowa City to prepare for next season. He knows he has plenty to work on to become a better NFL player. A few points of emphasis include working on his foot speed, explosion, upper-body mobility, and a lot of soft tissue/preventative type work to help reduce the chances of soft-tissue issues. Welch, who weighs 240 pounds, would also like to cut five pounds to get a little quicker.

Welch goes into the offseason with some uncertainty. Since he was signed last season to the practice squad, his contract was week to week. But his status changed when he became a regular on the 53-man roster.

“That’s just a one-year contract, so I’m still on that contract technically until the beginning of April, that’s when the contract will expire,” Welch said. “I’m an exclusive rights free agent from that point on. So, the Ravens, all they have to do—if they want me to come back—is match the second-year minimum for me, and then I would have no say in negotiation, and they would have exclusive rights to me.”

If the Ravens decide not to sign Welch, they would most likely cut him and move on. At that point, Welch could sign with any team. But Welch prefers to stay with the Ravens.

“Absolutely,” Welch said. “I love the organization. I love the coaches. Yeah, it’s everything I could ever ask for from a team.”

If Welch ends up staying with the Ravens, he plans on continuing to show the coaching staff he is a valuable part of the team on special teams as well as defensively.

“Wherever the coaches place me, I’m ready to contribute in whatever way I can help the team win,” Welch said.