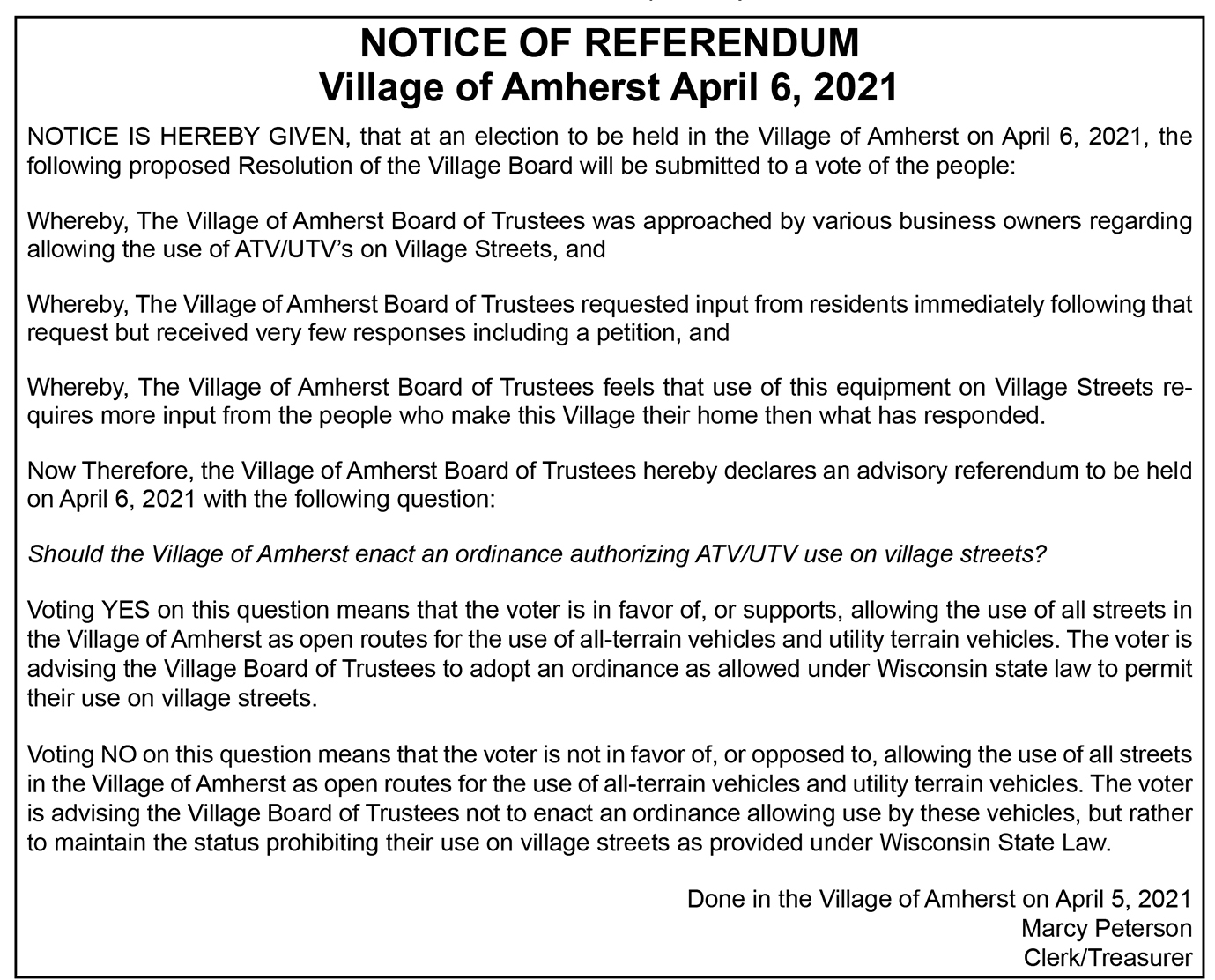 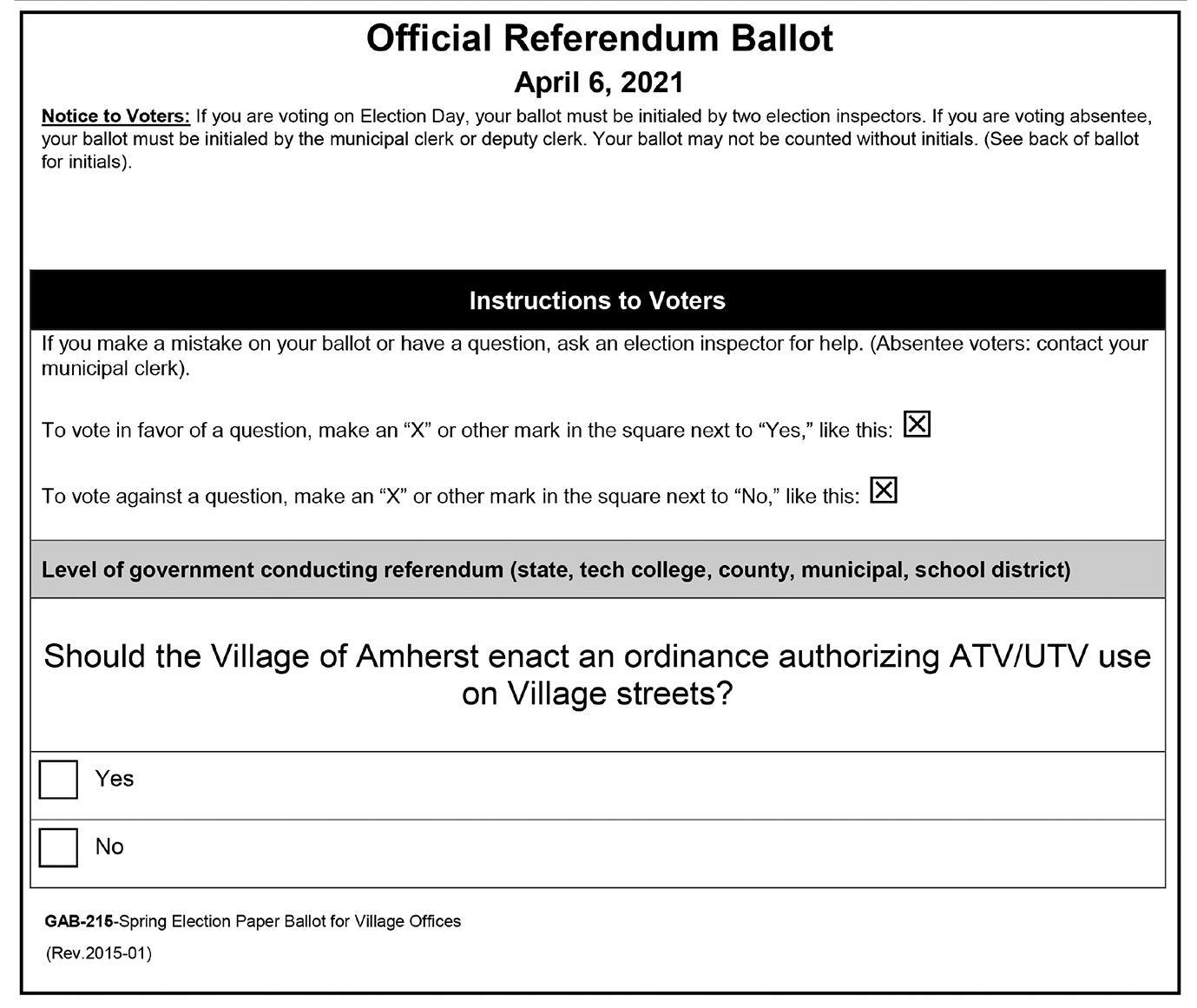 At a February 9 public hearing and Village Board meeting, held at the Jensen Community Center due to anticipated audience size, the Village of Amherst adopted a temporary ordinance allowing all-terrain vehicles (ATVs) and utility terrain vehicles (UTVs) to operate in the Village.

The ordinance, which expires April 13, was enacted to allow Village residents and businesses to see what impact such usage would have on the Village before voting on an advisory referendum April 6. Village President Mike Juris said that the April 6 referendum “will provide guidance for the village board as it determines if action to develop a subsequent ATV/UTV ordinance should be considered or if the village will return to prohibiting these vehicles on village streets.”

In a recent Village newsletter, Juris wrote, “The Village Board has received input from numerous village residents and businesses indicating comparable levels of both opposition and support on this matter. Individuals living outside the village and various organizations have also expressed their thoughts regarding ATV/UTV use in the Village of Amherst. While input in opposition to ATV/UTV use within the village generally noted noise levels, vehicle and traffic safety, and ordinance enforcement as concerns to address, the input in support of ATV/UTV use within the village generally noted the benefit for local businesses, the safe practices of operators, and the opening of the surrounding Portage County and Town of Amherst roads as factors to consider.”

He added that much research has gone into this ordinance and referendum as Village trustees received phone calls, visited with residents, reviewed letters and emails, and acknowledged a petition on the matter.

“The decision to proceed through this April 6 advisory referendum underscores their desire to act based upon the disposition of the people of our village,” he wrote. “While there will continue to be discussions on this issue over the coming weeks, the Trustees ask that all village residents consider the issues involved, discuss them with their neighbors, and express their opinion on the April 6 ballot.”

Juris added that the full text of the ordinance with specific citations is available at Village Hall. Additional explanatory material can be found below.

NOTICE IS HEREBY GIVEN, that at an election to be held in the Village of Amherst on April 6, 2021, the following proposed Resolution of the Village Board will be submitted to a vote of the people:

Whereby, The Village of Amherst Board of Trustees was approached by various business owners regarding allowing the use of ATV/UTV’s on Village Streets, and

Whereby, The Village of Amherst Board of Trustees requested input from residents immediately following that request but received very few responses including a petition, and

Whereby, The Village of Amherst Board of Trustees feels that use of this equipment on Village Streets requires more input from the people who make this Village their home then what has responded.

Now Therefore, the Village of Amherst Board of Trustees hereby declares an advisory referendum to be held on April 6, 2021 with the following question:

Should the Village of Amherst enact an ordinance authorizing ATV/UTV use on village streets?

Voting NO on this question means that the voter is not in favor of, or opposed to, allowing the use of all streets in the Village of Amherst as open routes for the use of all-terrain vehicles and utility terrain vehicles. The voter is advising the Village Board of Trustees not to enact an ordinance allowing use by these vehicles, but rather to maintain the status prohibiting their use on village streets as provided under Wisconsin State Law.

Done in the Village of Amherst on April 5, 2021  Marcy Peterson, Clerk/Treasurer