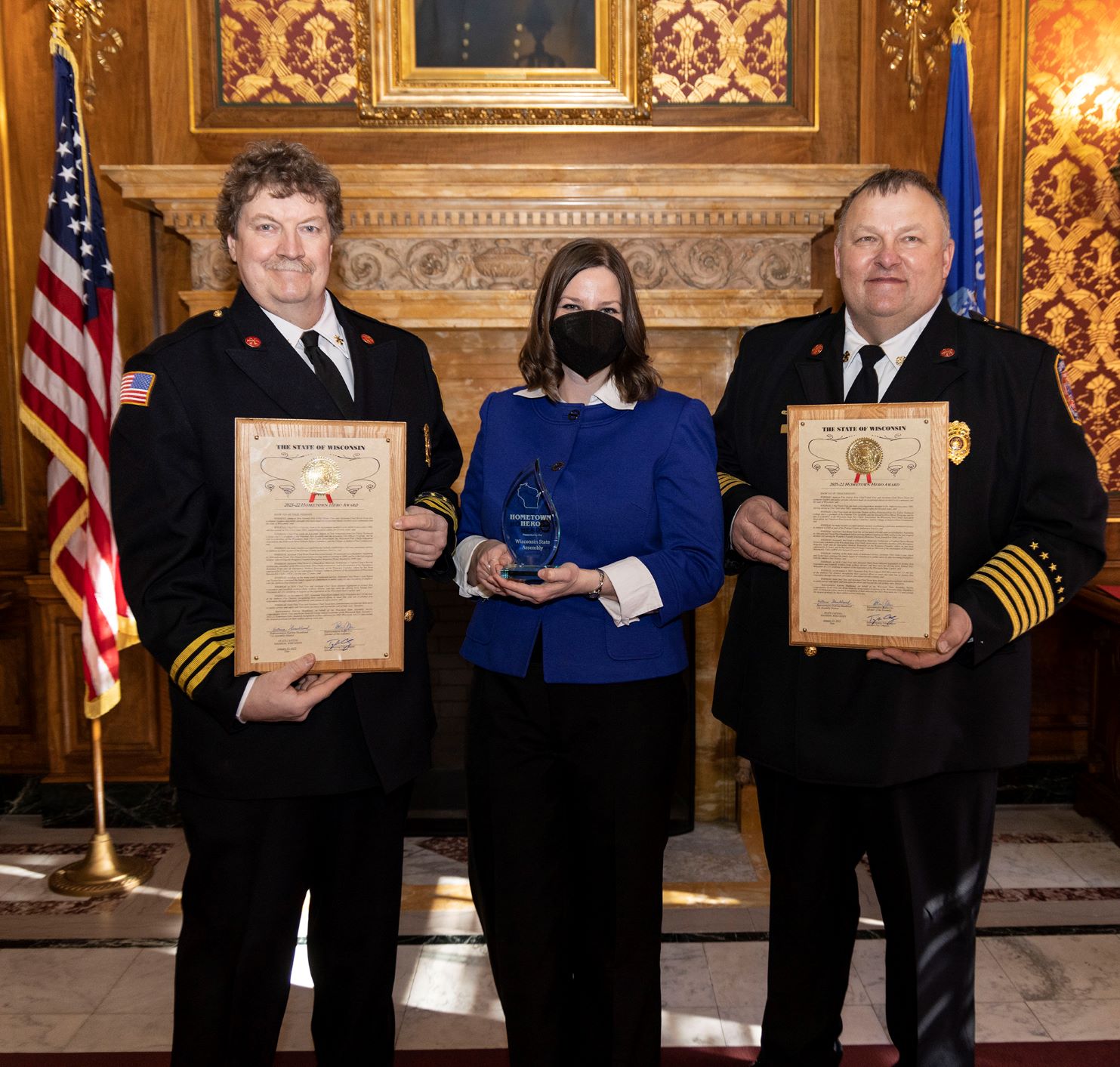 Shankland nominated Voss and Swan because of their work together on 2021 Wisconsin Act 115, a new Wisconsin law that created an emergency response zone around the scene of roadway accidents to help keep first responders and roadside workers safe from reckless drivers. Under the new law, there are additional penalties for traffic violations like reckless driving in areas where emergency or roadside response vehicles are present and personnel are at risk from traffic. The bill was signed into law by Governor Tony Evers at the Amherst Fire District headquarters December 6, 2021.

Shankland said, “I am pleased to have nominated Chief Voss and Assistant Chief Swan for one of the highest honors awarded by the Wisconsin State Assembly, and I am grateful for the opportunity to recognize their efforts. I nominated them for their tireless advocacy on behalf of first responders and their committed service to our community and state. From our first meeting in August 2018 to Governor Evers signing our legislation into law as Act 115 at the Amherst Fire District in December 2021, I have enjoyed working closely with Chief Voss and Assistant Chief Swan. They truly are our Hometown Heroes.

“Chief Voss and Assistant Chief Swan’s continued advocacy in the Legislature to initiate and pass a bill into law to protect first responders and roadside workers underscores the power of every person’s voice. Their successes highlight how much we can make a difference in our community and state. Our first responders have demonstrated tremendous leadership in initiating this bill, and I sincerely thank them for their tireless efforts to get this bill introduced, passed, and signed into law over the past three-plus years with me. Our community is also grateful for the many ways they lead and serve every day.”

Swan, who initiated the bill’s creation, said: “Throughout the process of taking Act 115 from just an idea to getting it signed into law, we heard from first responders repeatedly that they would much rather go into a burning building than respond to an accident on the roadway due to the risk of distracted drivers. I am very proud to have helped bring this important new law forward, and I hope that it will help protect the lives of all of our state’s firefighters, paramedics, EMTs, State Patrol, law enforcement, highway workers, tow truck operators, and other first responders and roadside workers.”

Voss added, “As Fire Chief, I’m always proud of the hard work the men and women of the Amherst Fire District and first responders around our state do every day to keep our communities safe. I’m honored to receive this award, and I just hope Act 115 makes it a little safer out there for them and for everyone on Wisconsin’s roads.”

The Wisconsin State Assembly Hometown Heroes program serves to identify and recognize individuals from around the state who are working to make their communities a better place. Award winners are invited to the State Capitol and given an opportunity to speak on the Assembly floor as a special guest, along with their nominating legislator.