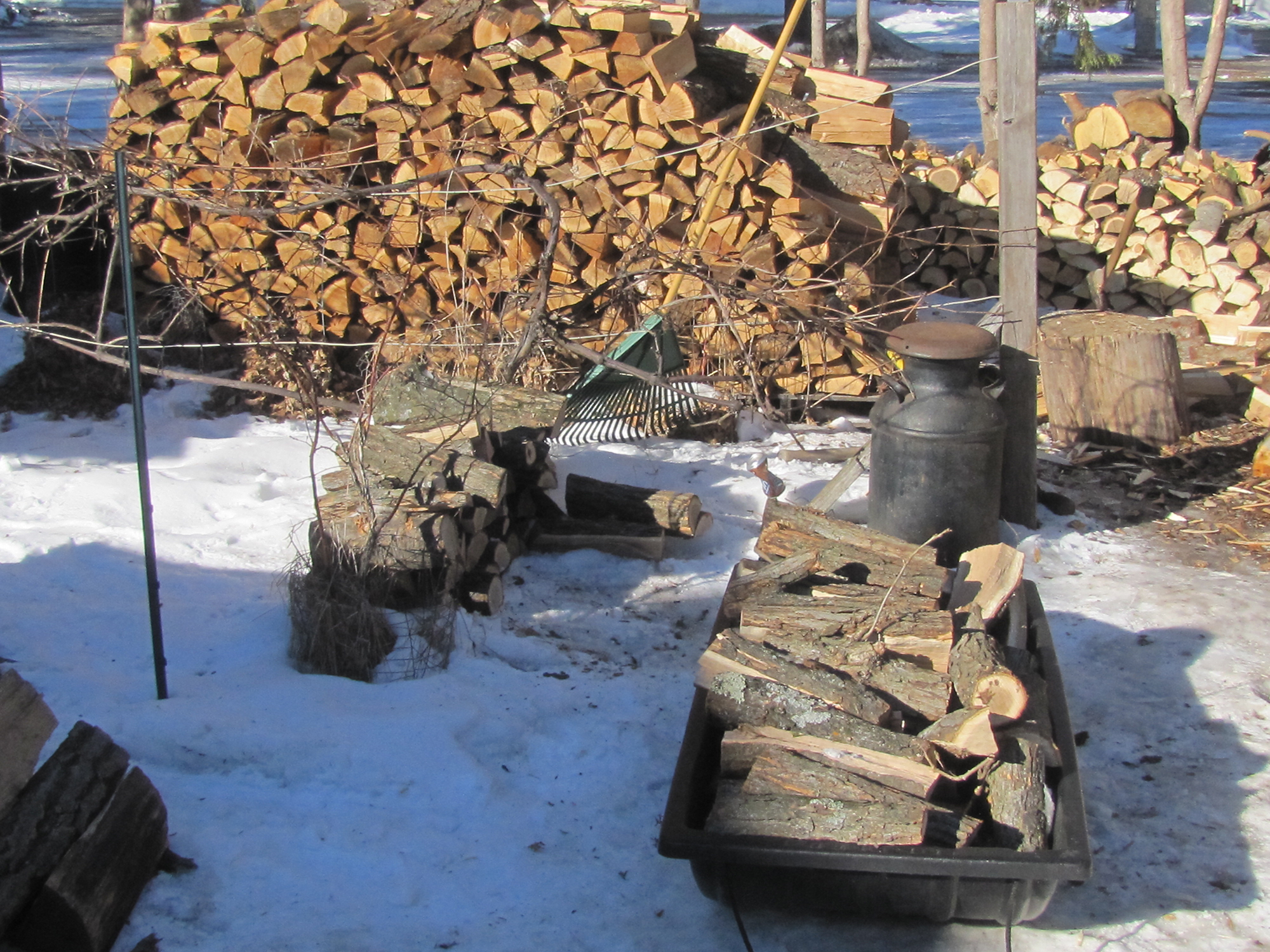 I suspect we all know that firewood heats us many times. There is the cutting, the hauling, the splitting, the stacking, the trucking of armloads to the house, and finally cleaning up the mess, the chips, the bugs, and the ashes. None of this is any secret, and none is unanticipated. It is all just part of the deal, and that deal is the unbelievable comfort of sitting next to the old stove warmed by the radiant push of nature’s captured sun.

While my lust for warmth and comfort now seems paramount to my daily life, it may have to do with age. Those other activities also have their merits, from exercise to pursuing a worthy cause; maybe the drive to organize or possibly even to fulfill an ancient drive to survive in a long-gone Paleolithic past.

Like Ronald Reagan, I not only can’t resist spitting wood but genuinely relish the total experience. For Ronnie, his handlers would absolutely go into fits when he was found in the backyard banging away at the woodpile instead of communists. He could have been injured, but he would continue, stating it was part of his well-being. I suspect they took his woodpile and axe away.

Seeing as how I am not needed to fight commies and always have a woodpile, the game goes on. So what is it with this splitting—or all the rest that goes with it?

Tony loaned me a book because he, like me, relishes the very touching of wild wood. The book is titled Norwegian Wood—Chopping and Stacking—The Scandinavian Way. It was not written by the Beatles but by an actual Norwegian, Lars Mytting. I would have preferred it was written by a Swede because it would have been better yet; still, I settled for the ancestral neighbor.

The book got me thinking, mulling if you will, about this affliction, maybe even wondering if this desire was, like many behavioral patterns (say fire watching), buried in my genetics. Are there certain patterns of behavior in folks of northern European ancestry, the same peoples who for thousands of years had to fight the cold of the north? Is this innate, ingrained? Did we evolve to seek out a source of warmth and energy that kept us alive? The draw appears strong, maybe subtle, but after all, 100,000 years of struggle in the wintery north certainly must have favored the rough beasts known as homo sapiens who sought out the best wood. Why would Ronnie do that? And me and now the grandkid?

So the bigger question might be, just how far does this wood lusting, this innate fascination, this possibly hoarding desire, go? It is not simply the grabbing of any wood, throwing it on a pile, then waiting for the cold or for roasting a mammoth steak. It appears more fine-tuned, more engulfed in nuance.

For instance, and this may just be me, there is a tendency to evaluate each piece of wood. “Nah, I’m not gonna mess with that damn white cedar,” I might think, but then the grandkid says, “I’ll take it because it is great in the early fall when I want a low fire, and it is easy to split.” Really! The white oak can be difficult and requires a little extra push of the maul. Still, it is easy to feel the heft of it and know the energy that is within, just like the black locust. It seems my mind is doing a subtle but necessary evaluation of energy invested to energy returned.

I move toward the red oaks because it splits easily and stacks well. The maple is lighter, but adequate, not like the willow, which has less energy than a fresh buffalo chip.

The working of the mind does not end just in the practicality of each species; but there is also a strange draw to the nature of each type of wood. Our grandson favors those woods that allow him to just swing away wildly with his three-quarter weight Hudson Bay axe, almost as if he is playing golf. Is he seeking out the easy pieces, maybe the ones that could have been split with ease by his Cro-Magnon ancestors? He wants a lot, he wants it now, and he knows that while it is wet at the moment, in two weeks it will be dry and useable. There is an evaluation of all wood it seems. Ignore the difficult, the nasty joints. I have been “ordered” to cut out the knots and leave the straight grained pieces of the red pine or poplar so kindling can be made, I noticed, with great pleasure.

While this discussion could go on and on, one more notable aspect of wood has to be mentioned. This also may have to do with the knowledge of wood and what each species can do. It is the scent. It seems that each species has its own odor, and many are interestingly enjoyable, pleasant if you will. Possibly, this developed as a way to identify different woods for different uses, maybe just for aesthetics for all I know. In any case, this is an allure that draws memories and possibly rattles the Paleolithic mind.

A couple years ago, while pounding away at some cantankerous white oak, I noticed a very distinct odor lifting from the cut pieces. On lifting it to my nose, I realized it was the faint but tantalizing scent of fine whiskey. I can’t talk to Ron Reagan, so we’ll have to leave it there.

Hans Borli may settle it here.

The scent of fresh wood

is one of the last things you will forget

when the veil falls.

The scent of fresh white wood in the sap time:

As though life itself walked by you,

with dew in its hair.

The sweet and naked smell

in the silence inside you,

using your bones for

With the hard frost beneath your tongue

You look for the fire to light a word,

And know, mild as a southern wind in the mind,

there is still one thing in the world