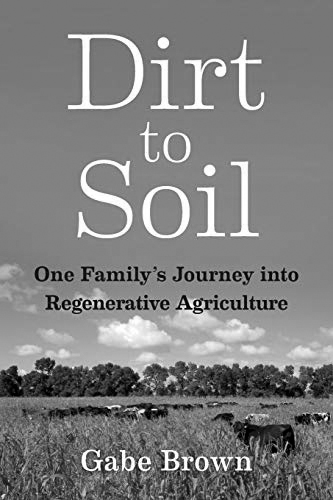 One of the most encouraging trends evolving in agriculture, from the perspective of restoring healthy groundwater, is the growing worldwide movement called “regenerative agriculture.” One of its proponents, Gabe Brown, will speak at the Farmers for Tomorrow meeting at the Jensen Community Center in Amherst on Monday, February 7, at 10 a.m.

Regenerative agriculture reflects a growing understanding that farming techniques that build soil health and allow more complex natural processes to take place in that soil can lead to better long-term yields and profits for farmers as well as reducing environmental problems that plague areas where industrial farming dominates the landscape.

Brown’s experience as a North Dakota grain farmer matches similar narratives from farmers worldwide struggling with financial survival and crumbling rural communities. He began experimenting in 1993 to stave off bankruptcy in the midst of a drought, adopting no-till practices to preserve moisture in his soils. When that proved successful, he went on to use other recommended sustainable practices, including diverse cover cropping, crop rotations, and planting of more perennials. By 2001, he was able to stop using pesticides and fungicides because of healthier and more diverse plant growth. In 2007, he stopped using synthetic fertilizers completely. Instead of deficits at the end of the year, he began to see profits rise as soil health increased and the amount of money spent on traditional industrial inputs to raise crops were lowered.

In November 2021, his 5,000-acre farm was recognized by the Heinz Family Foundation as the outstanding example of regenerative agriculture in the nation. They cited improved soil fertility, drought resistance, and crop nutrition that have transformed his land into a highly profitable farm while at the same time reducing negative environmental impacts affecting groundwater and wildlife.

In their testing, Brown’s crop yields were higher or equal to yields in more industrially farmed neighboring operations. Because more organic matter was being added to the soil, his fields were much less susceptible to intense rain and drought cycles, too. In fact, scientists found that organic matter in his soil had increased dramatically, from just less than 2% to between 5 and 8%. According to their citation, “topsoil depths have been measured at four to five times the average for the area and soil carbon has been measured at 96 tons per acre, 180 tons in some areas, a figure far higher than the 10 to 30 tons per acre that is typical in the region.” Brown’s book, Dirt to Soil: One Family’s Journey into Regenerative Agriculture, has become a key resource for both novice and seasoned farmers in this country.

Brown’s experience in North Dakota has been echoed around the globe. In Australia, Charles Massy, author of Call of the Reed Warbler, was raising sheep on 5,000 acres and heading into serious bankruptcy when he changed his practices out of financial desperation. By his own account, he went from “a chemical-using farmer with dead soils, to a radical, ecological farmer with profits.” The light went on for him when his grandson innocently asked, as he was preparing to spray herbicide, “why do we have to kill things first to grow things?” His book cites many examples worldwide of farmers who abandoned industrial production methods for regenerative techniques that produce profits, helped stabilize rural communities, and improved water and soil quality.

It is important to note that solutions in North Dakota and Australia may not be applicable to all agricultural areas equally. But the problem of groundwater pollution from nitrates and pesticides, increasing health problems linked to residues found in foods produced by industrial agriculture, and the desperate financial plight of many small farmers are well known in Wisconsin. Repairing those problems requires new solutions and altering present industrial practices.

For example, in Portage County, new studies have shown that land intensely mono-cropped and irrigated that receives high applications of fertilizer and pesticide is the most likely to produce high pollutant levels in groundwater. Improving soil fertility by increasing organic matter, using more crop rotations, adopting more perennials, and depending less on synthetic inputs has been recommended for years in our sandy soils by agricultural specialists. Yet industry profits continue to dominate state and county agricultural policy, limit innovation, and maintain the status quo of ecological disaster and financial ruin faced by small farmers.

The answer is for small groups like Farmers for Tomorrow to join with other farmers to promote regenerative methods and restore ecological balance to food production and for consumers to support this work. Brown, through his teaching and work with the non-profit Soil Health Academy, is part of this effort. Their slogan, “common ground for common good,” makes a lot of sense.

Join him and others interested in sustainable farming on February 7 at the Jensen Center. There will be a small charge to cover lunch costs provided as part of the program.