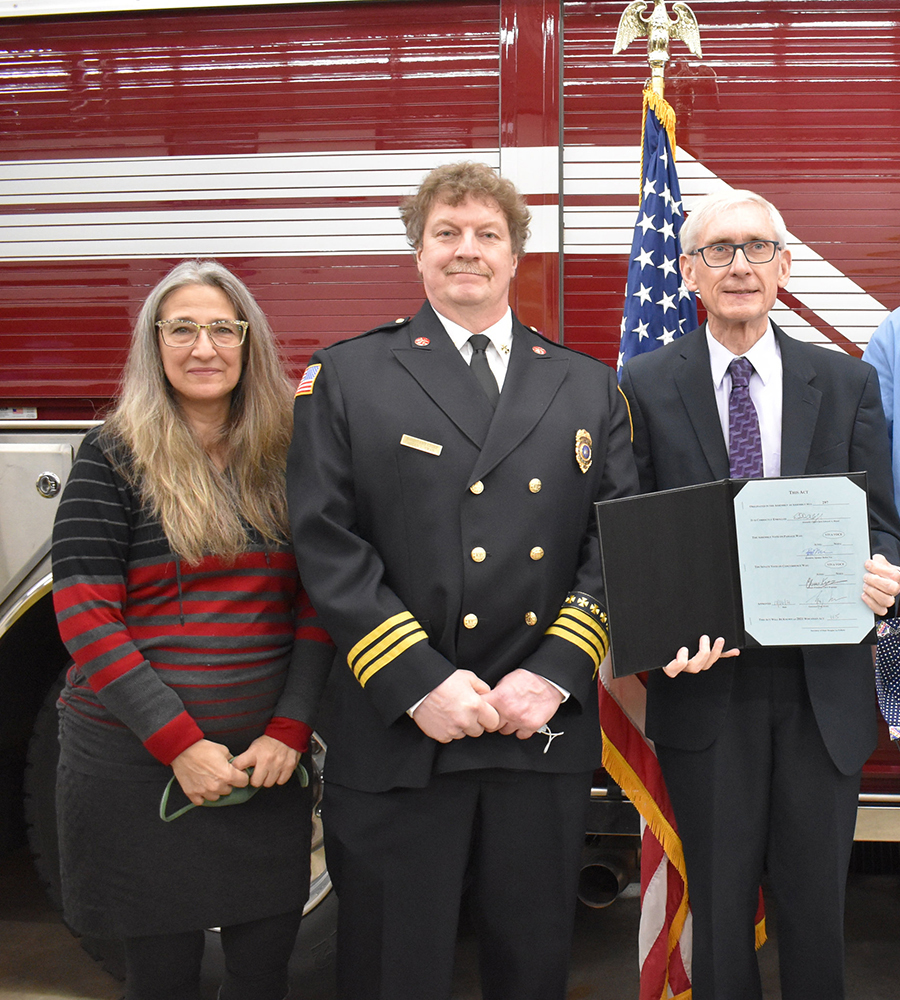 A state bill protecting first responders from reckless drivers was signed into law by Wisconsin Governor Tony Evers December 6 at the Amherst Fire District headquarters. The process began in Amherst in August 2018 when Amherst Assistant Chief Brian Swan saw a need for such a law after a driver collided with a fire truck during an emergency in Waupaca. Representative Katrina Shankland (D-Stevens Point) was among the dignitaries at the signing and said, “This event was a reminder of the power of one person’s voice, and how together, we can make a lasting impact in our communities and state. The people who put their lives on the line to keep us safe every single day are owed our deepest thanks, humblest gratitude, and commitment to continue advocating for their safety.”

Swan began his quest to introduce such a bill into the State Legislature by inviting Shankland and Senator Patrick Testin to the Amherst Fire Station to discuss it. Amherst Fire Chief Victor Voss joined the initial group, which grew into a state-wide coalition that included 16 statewide organizations representing fire, EMS, law enforcement, utility workers, tow truck drivers, and more. Members of the Amherst, Plover, and Stevens Point Fire Departments testified at the Capitol in support.

Shankland said that her visits to fire departments around the state brought the need for the bill into sharper focus. “When I traveled to Endeavor to meet with the Endeavor/Moundville Fire Department, Chief Mike Bourdeau told me about a 34-year veteran firefighter, Larry Millard, who was struck and killed while responding to an accident site because a driver failed to move over,” she added. “Chief Darren Jorgenson from the Delton Fire Department came to the Capitol to meet with me and shared that a Delton firefighter, Joe Sabol, was also struck and injured by a driver when responding to an incident.”

Members of Millard’s family as well as Joe and Amanda Sabol attended the bill signing in Amherst.

The bill gives first responders and fire fighters across the state additional protection, Shankland said, adding “Throughout the legislative process, we heard from first responders from all over Wisconsin who said they would much rather run into a burning building than respond to a roadside incident. They told us that they have gear to protect them from fires but nothing to protect them from reckless drivers. Their families said that they worry most when their loved ones are called to respond to a highway incident. Everyone just wants their loved ones to come home safe.

“This law provides our first responders with some new gear—through education, enhanced penalties for hurting a roadside worker, and a new emergency zone with double the penalties for infractions, including cell phone use. These provisions will help protect roadside responders and workers while educating everyone about the crucial responsibility to drive carefully, especially near an incident site. I hope that this new law will be an impetus for us all to do better and spark a statewide conversation about our responsibility to each other as neighbors and community members.”

The bill also requires the DOT to educate the public about these changes and the risks associated with failing to move over and reduce speed or using cell phones in emergency response areas.

Wisconsin Governor Tony Evers (seated at table), surrounded by representatives of area fire departments as well as the family of Larry Millard (seated at right) and State Representative Katrina Shankland (standing in white jacket), signed Assembly Bill 297 into law as 2021 Wisconsin Act 115, giving emergency workers added protections at accident scenes. The signing at the Amherst Fire District headquarters December 6 marked one of the few occasions when Evers signed a bill outside of his offices in Madison.