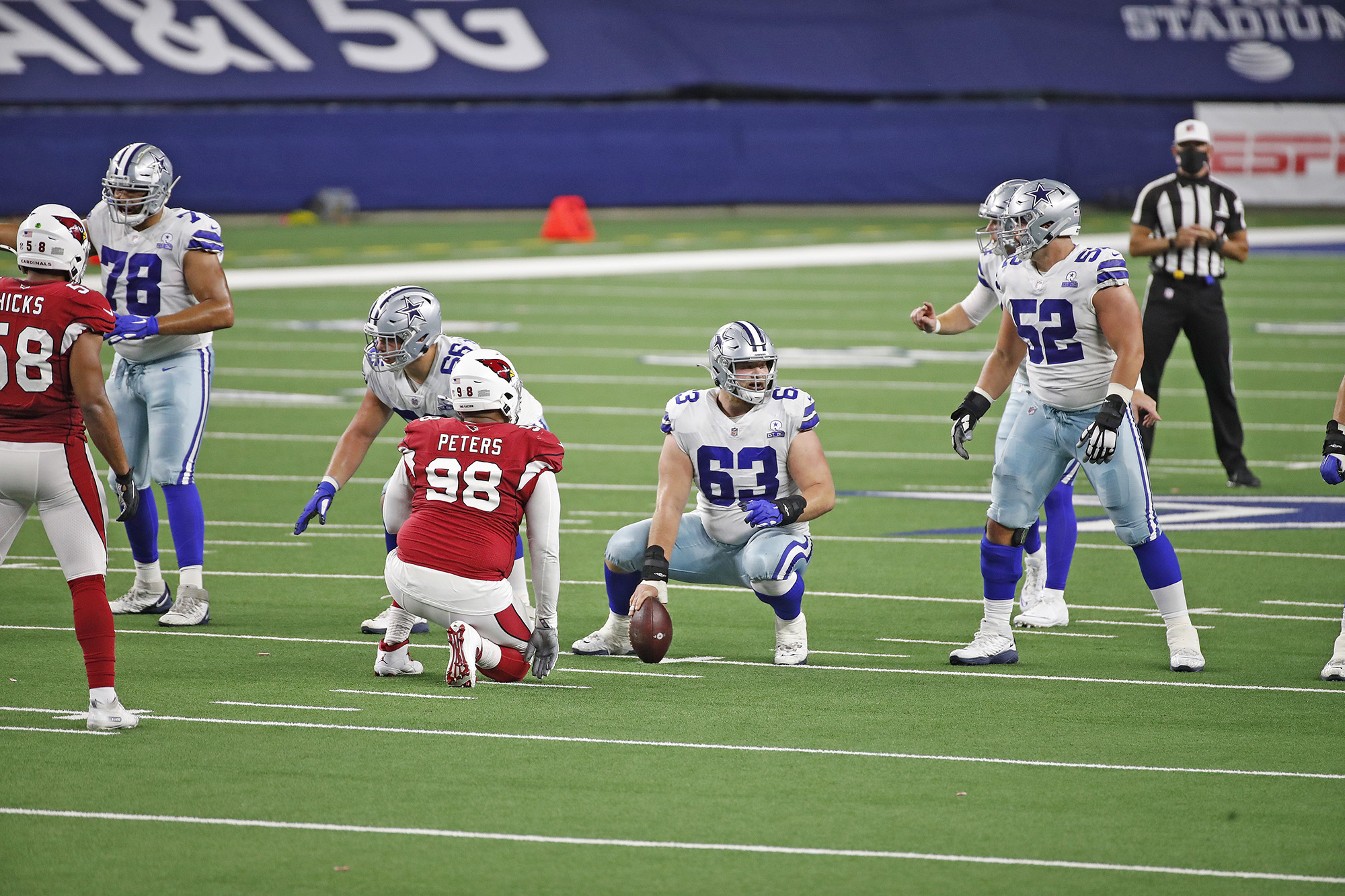 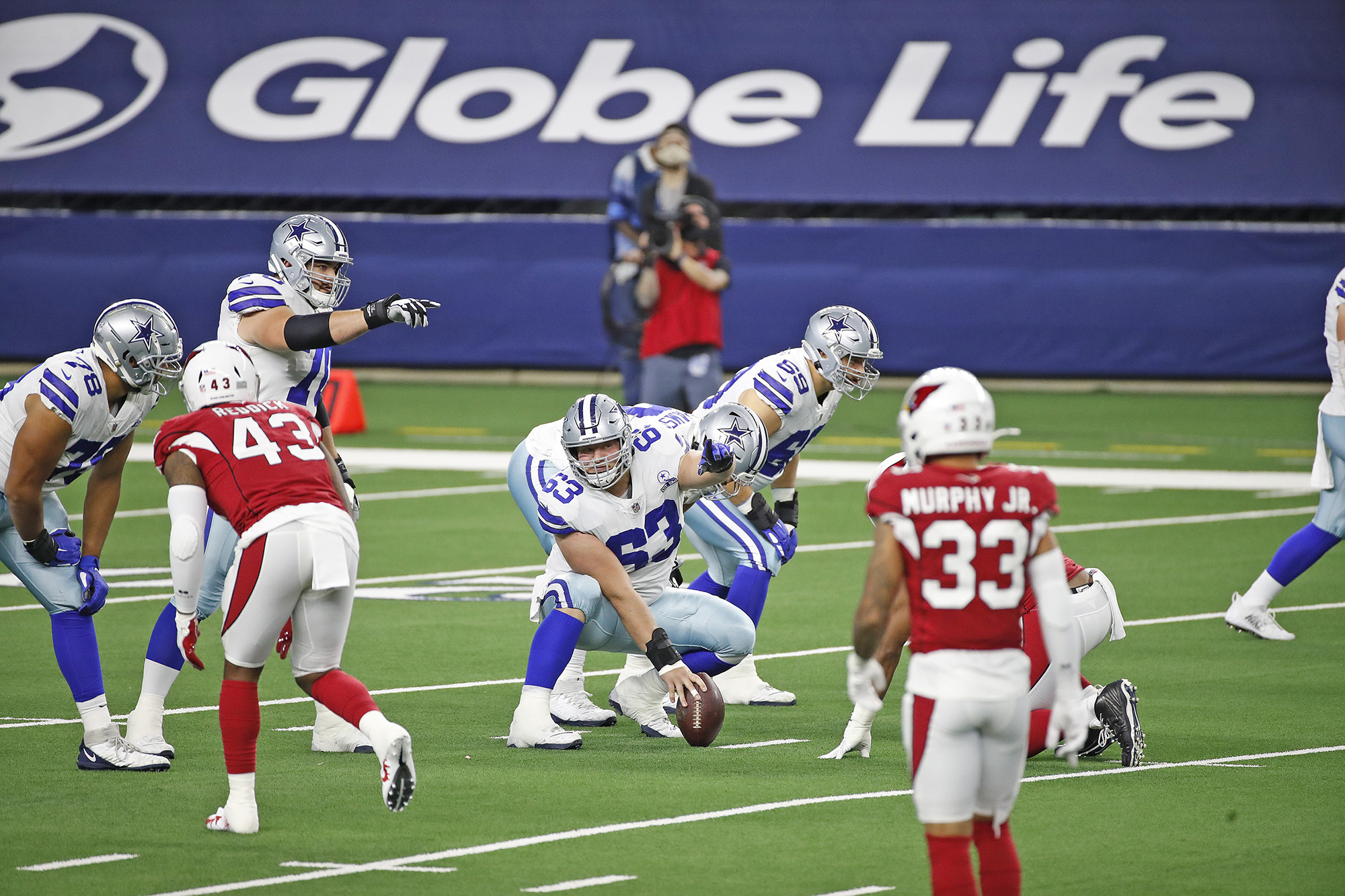 Tyler Biadasz walked on the field at SoFi Stadium in Inglewood, California, prior to his team’s road game against the Los Angeles Rams.

The Dallas Cowboys rookie center had a special feeling; it was his first NFL game.

“At first glance, obviously, you’re like, yeah, you’re here. At the same time, you’re like, all right, let’s go have fun and do our job,” Biadasz said. “You have to stay locked in. It’s one of those moments where you smile and then you get locked back in.”

“Just seeing the guys you’ve watched on TV your whole life and some former teammates on the other side of the ball,” Biadasz said. “You play them and everything and at first, obviously, it’s pretty damn cool. But at the same time, I just went through a training camp, so when you’re playing against that type of caliber of guys, you’re ready for the game and honestly, you don’t really think about it.”

It took Biadasz just three weeks into the season to earn significant playing time on the Cowboys’ offensive line. By Week 5, the Amherst native was starting his first of four straight games.

It obviously wasn’t a typical year for Biadasz to be on the field, but he made the most of it.

“It was an interesting off-season leading up to it,” said the 23-year-old. “It seems like a while ago, but that definitely factored into just entering the NFL and everything like that. But I thought it was a great experience. Obviously, being able to play and being able to experience in-game stuff—you can say it was weird without fans and everything—but it comes down to football is football.”

“I worked really well with the team and scheme and everything like that.”

The former UW-Madison standout was a fourth-round pick in the 2020 NFL Draft. He appeared in 12 games in his rookie campaign and made an immediate impact.

Biadasz garnered his first significant playing time in Week 3 against the Seattle Seahawks, staying on the field almost an entire half. The next week against the Cleveland Browns, Cowboys starting center Joe Looney went down with an MCL sprain in the opening quarter, and Biadasz was thrust into action.

Biadasz showed the Cowboys’ coaching staff, which is led by former Packers coach Mike McCarthy, he could step in at any point and be prepared.

“You’re coming off the bench, which is unique for me, because I’d never previously had to come off the bench coming into a game,” Biadasz said. “For me to be ready, I would say that was the biggest thing.”

After stepping into the starting lineup, Biadasz played every snap through Week 8.

Biadasz continued to progress and gain confidence along the way. He also earned more trust from the coaching staff.

Getting his first NFL start in Week 5 against the New York Giants was a big moment for Biadasz. The Cowboys pulled off a victory but lost an important piece of the team as quarterback Dak Prescott suffered a gruesome compound fracture in his right ankle.

Coming into the game, Biadasz was prepared for battle.

“I was ready for the matchups we were going against and everything, and we were playing at home, which was even better,” Biadasz said. “The win itself, going through so much stuff throughout the game with Dak and everything like that. To be able to come back from some times where we were facing some adversity, it was a really great experience.”

Prior to the Cowboys’ game against the Pittsburgh Steelers in Week 9, Biadasz suffered a hamstring injury. He was placed on injured reserve on November 21 and missed three games—he was reactivated December 12. Biadasz got playing time in the final four games of the season, but he didn’t start.

The Cowboys finished 6-10 on the season, their worst record in five years.

Playing for a team with a losing record is not something Biadasz is used to. During his four years at Amherst, his teams had a combined record of 51-3. In Biadasz’s three seasons playing at Wisconsin, the team lost 10 games.

Facing adversity as a rookie was an eye-opener for Biadasz.

“That was an experience that fortunately I never went through before, but when you lose a quarterback and you’re down a lineman and you’re filtering in different offensive linemen through the season, that was a test of us to build chemistry,” Biadasz said. “That was a very interesting and unique situation. At the same time, I’m very proud of our guys and how they came through. It was definitely a next-man-up mentality and everything like that. It’s obviously difficult when you’re still putting all the work in and everything like that and you come up short by a touchdown or four points here or there. We had a lot of those this last year, but it was definitely tough to swallow, I’m not going to lie to you about that. But it feels good at the same time to work on the little things—they definitely matter, especially at this level.”

After the Cowboys’ season wrapped up at the beginning of January, Biadasz was able to get out of town later in the month. He headed home to Amherst to see family and friends for a few weeks.

Living in a big city like Dallas has been different for Biadasz. He isn’t too keen on fighting traffic, but he said Texans have treated him well the past year.

“I love it here,” Biadasz said. “It’s interesting, growing up I love Wisconsin and all the aspects of it, but when you get an off-season away from snow, you’re appreciative of the weather a little bit more.”

Biadasz returned to Texas on February 11 in preparation for off-season training. He will be frequenting the Cowboys’ training facility in the coming months to get ready for Year 2 in the NFL. Biadasz said he hopes to make it back to Wisconsin a couple more times between now and when the 2021 season starts.

Biadasz knows he has some areas to work on to improve his game. But he’ll work on all facets so he can be a well-rounded player.

“I think it’s just more so building yourself,” Biadasz said. “You obviously want to get stronger and you want to get faster and you want to have your agility more. It’s overall perspective, I think. And not being able to have the offseason last year like I wanted to, having minor shoulder surgery, and then COVID hit where it’s like you’re not being able to be with the team, so it’s just like building chemistry with other players and like being able to actually do that.”

This is an important summer for Biadasz to build on his accomplishments from his solid rookie year.

“I’m definitely excited, and this is probably going to be a really big off-season for me,” Biadasz said. “I’m healthy. I’m not going through any surgeries. I’ve been very blessed that I’m able to train. It’s been a while.”