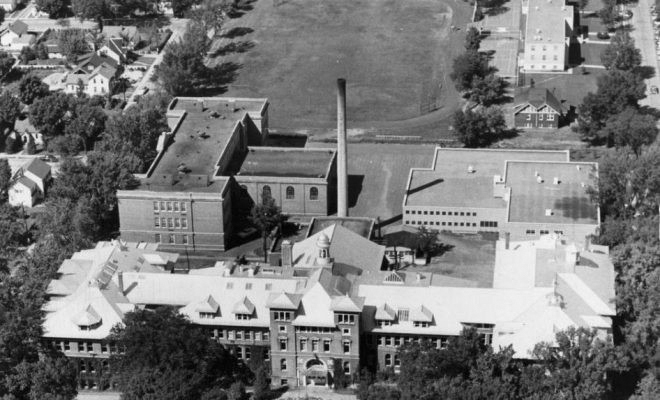 A memorial marker has been placed on the UW-Stevens Point grounds to acknowledge indigenous people buried there many years ago. This historical aerial photo shows the campus in the 1950s.

A memorial marker has been placed on the UW-Stevens Point grounds to acknowledge indigenous people buried there many years ago. The university occupies the ancestral lands of the Ho-Chunk and Menominee people and recognizes this at the start of all meetings on the Stevens Point campus.

Recently, historic research showed the campus encompasses what was at one point a Native American camp and burial ground of the Ho-Chunk, Menominee, Ojibwe, and Potawatomi. In the 1860s, scarlet fever devastated a diverse group of Native Americans who were living outside of Stevens Point after being forced out of their ancestral homelands by settlement. The deceased were buried on this site.

The Stevens Point Normal School was built on the site, opening in 1894. In 1925, archaeologist Charles E. Brown recorded this indigenous village and burial ground.

The memorial marker is one of the first steps to acknowledge the Native burial grounds. The marker will be in place while tribal historic preservation, campus, and community representatives work together to create an appropriate permanent memorial to native ancestors. The marker was installed during a ceremony December 17, with representatives of the tribal nations and university speaking.

Karen Ann Hoffman of the Oneida Nation, who lives in Stevens Point, and archeologist Ray Reser, retired from UW-Stevens Point, have led efforts to honor those in the mass burial site.

The newly formed School of Humanities and Global Studies is working with tribes, faculty, and students to interpret this history and install a permanent exhibit in UW-Stevens Point’s Museum of Natural History, tentatively scheduled to open in 2023.