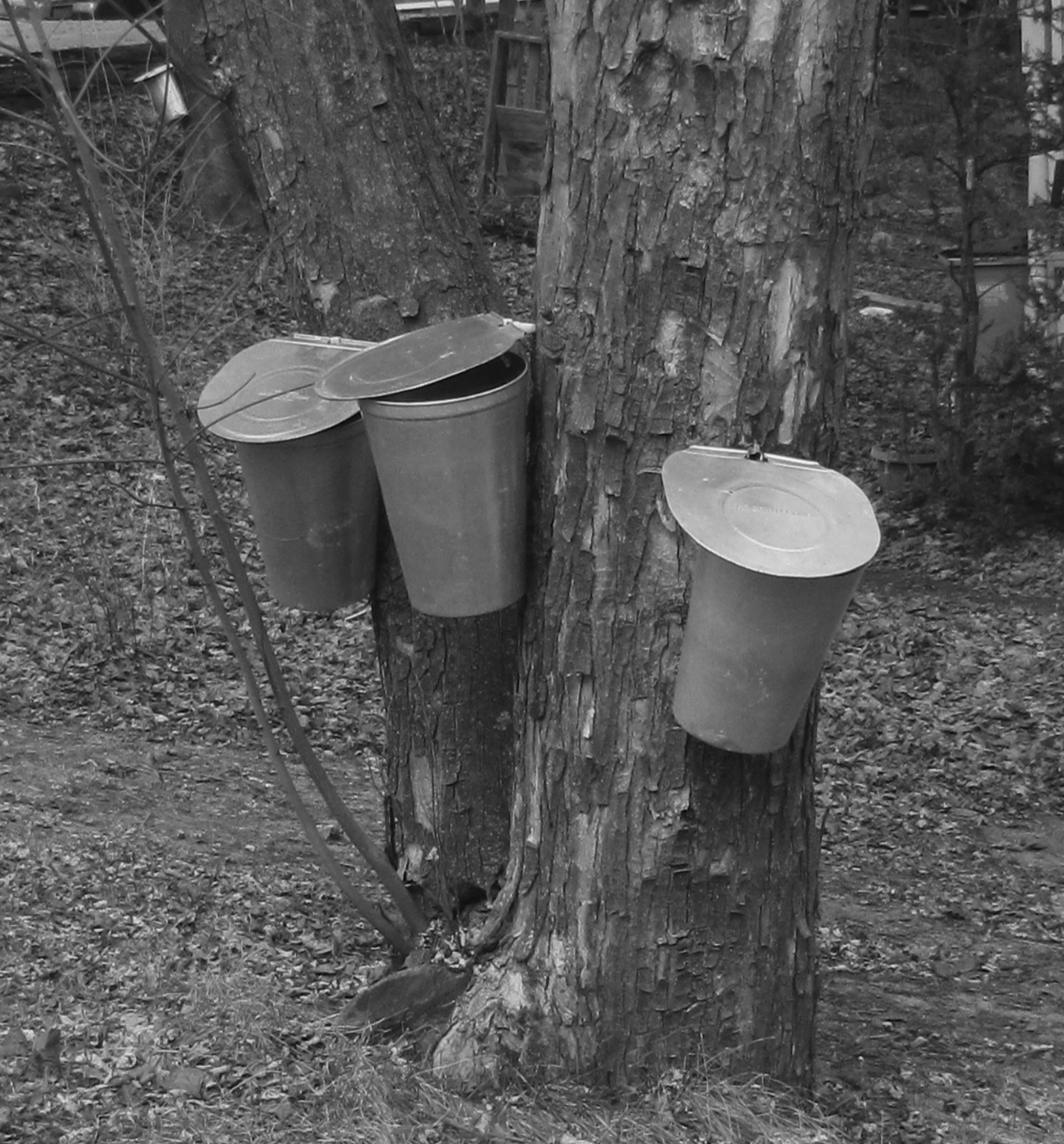 The grandkid said just yesterday that it appeared every maple tree seemed to have a personality of some sort. I had noticed that as he went around and gathered the buckets, he would, almost out of habit, sip the last few drops from the containers. Sometimes the weak sap would slosh over him much like I remembered having beer slosh over me while attempting to chug a pitcher. While my effort was out of juvenile misbehavior—or was it stupidity—his seemed to be more for a culinary, maybe scholarly, experience. He would pause, savor the fresh liquid, reflect as if sampling a merlot, and then make a statement. “You know, every one of these trees is different. Those three red maples down in the hole at Wayne and Patti’s taste like watermelon—seriously. That one on the hill hints of walnuts. Man, Tom’s are really sweet and just pour out. That one at Merlyn’s tastes weird.”

Now, I have had at least one individual tell me she talks to trees, in part to get their permission to, say, tap them for maple sugar sap. I have even caught myself talking to them, saying things like, “If you could speak, I bet there are some stories here,” as I looked at a long horizontally extended branch that seemed to comply with myths about hanging trees. Or, “Look at you all spread out there in the thick forest of younger taller trees. What’s with that?” Then I remember the botanical teachings pontificating on open-grown burr oaks that had no competition so they simply spread out wide. They were the trademark of ancient oak openings or long-gone Wisconsin prairies. I suppose it is possible to still envision drifting buffalo under those same majestic oaks. Central Wisconsin forests are full of these huge spread-out oaks left over from a time long ago.

In our casual conversations about tree personalities, I asked the kid about the one maple close to the road in front of the neighbor’s house, the one that never ran. He looked at me with slightly lifted eyes “I hate to tell you, man, but you tapped a white oak. I thought you were some sort of botanist?” I had to remind him to keep a lid on that. It was then I recalled the heavy producing box elder I tapped in Colorado only to later learn, under the stench of the boiling sap, that it was right smack over a septic tank. Mistakes are made, but that is just part of rich texture of life in the sugar bush—and tree personality disorders.

Speaking of mistakes, a week ago I was invited to sample Tom and Cindy’s grand maples in front of their home. It was a generous offer as the trees were stately, well-formed, and showed no sign of mistrust. Plus, visiting them came with an opportunity to chat and even see a picture of Tom’s youthful ability to dunk a basketball. It was as if each tree or set of trees does offer more than just beauty and sweet offerings.

I rambled over in the morning, plopped out of the car, shuffled across the lawn, and proceeded to punch a hole in both trees to find the nectar flowing in spectacular form.

He then smiled and added, “You do know this is not my yard.”

In a morning haze, I looked up and damn, it wasn’t. It was Rick and Maureen’s.

Tom just smiled at my senile effort and calmly noted, “Ah, don’t worry. They left for Mexico an hour ago.”

Tom’s trees were even better, and the six taps combined boiled out seven pints of the finest light syrup of the year.

While this has not been a treatise on the nature of trees, it is an observation about our friendly leaved friends that would indicate there may be a need at some point to seek an education, maybe a PhD, on tree personalities. I can see it now, Norwegian Maple found to have multiple personalities, one featuring dark, almost purple year-long leaves and yet not self-conscious but confident in its ability to produce a refined, almost nutty, sweet sap. Not talkative, subtle, not invasive, but forthright and suitable for front-yard presentation. The grandkid may have found a calling.