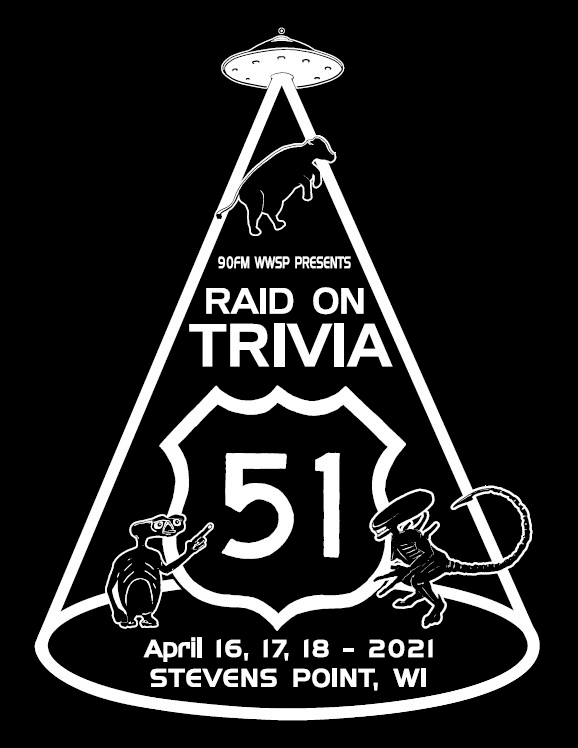 The world’s largest trivia contest is back this year—and it is out of this world.

The Stevens Point community will celebrate 51 years of trivia with the UFO-themed “Raid on Trivia 51” to be held April 16-18 on WWSP-90 FM, the student-run campus radio station at UW-Stevens Point. The event is the station’s largest fundraiser.

Originally scheduled for April 2020, “Raid on Trivia 51” was postponed because of the COVID-19 pandemic. This disappointed Stevens Point residents, UW-Stevens Point alumni, and trivia players worldwide. Two online events, a retro Trivia contest in April and “Experiment in Trivia” in October were offered in 2020, paving the way for a revamped version of “Raid,” with format and hours adjustments.

Teams can register by filling out a form found on the trivia website (90fmtrivia.org) by April 9. The contest begins Friday, April 16, at 6 p.m. and gives players a break from midnight to 8 a.m. on Friday and Saturday night. Teams answer an average of eight questions an hour for 38 hours throughout the weekend. Answers will be submitted online through a special website moderated by 90FM staff.

Trivia merchandise can also be purchased through the main website with those proceeds also benefitting the station.

Trivia Contest Coordinator Jim “The Oz” Oliva said, “We’re grateful for all the support from our Trivia players over the years. We’re so excited to bring them their favorite weekend of the year.”

WWSP-90FM is the alternative radio station broadcasting from UW-Stevens Point. As one of the largest college radio stations in the Midwest, 90FM provides students hands-on experiences in radio broadcasting. Trivia was established in 1968, and the money raised through the contest keeps the station running.