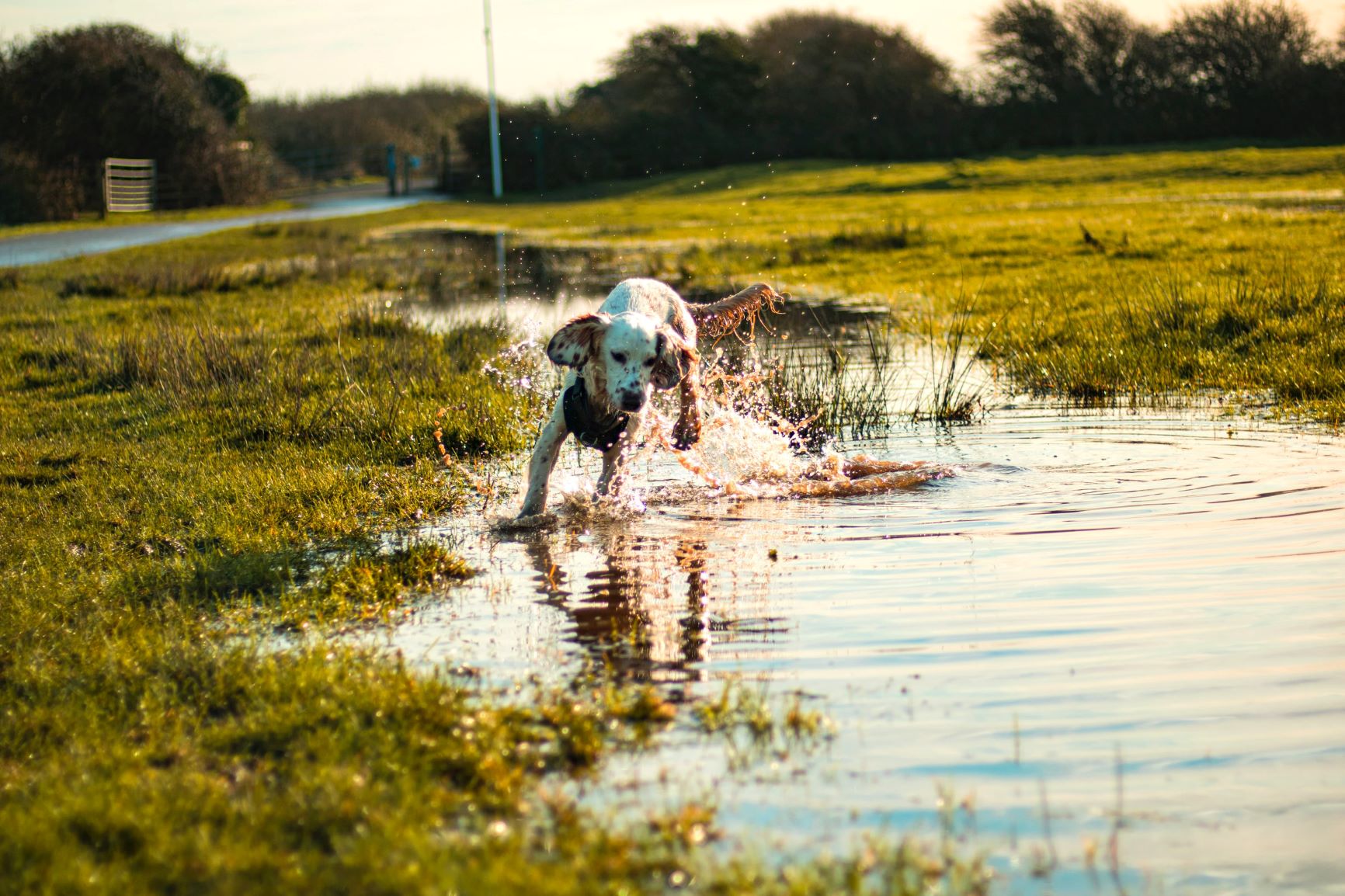 Spring has never been one of my favorite seasons.

Yes, it heralds the end of winter, and many times a long one. And yes, it brings along with it warm breezes and April showers. And yes, it also brings lovely and welcome spring blooms of color.

You know there is a “but” coming, right?

But spring is also a very messy season and brings with it a lot of sand, sticks, and mud. Especially if you own a dog.

I am of the philosophy that life is short and there are lots of things to experience, yet none of them is housework. Yes, I love a clean house and love to do my share of spring cleaning, but to constantly sweep out and mop up after every outing is just not something I can get excited about.

My dog, however, has a completely different attitude about it. But then he also gets excited about just having pooped, bounding away each time, leaving me to scoop up his not-so-little pile of “joy.”

Still, there is something to be learned from the joy a dog takes in this season.

For one thing, walks take a whole lot longer. Now that the snowbanks are gone, there is so much more to smell! I find myself muttering, “This is supposed to be a walk, not a sniff!”

So much more time is needed to analyze. Who’s been here? What have they eaten? Where are they headed? Will they be back tomorrow? We’ll never know what questions run through a dog’s mind as he meanders from tree to tree.

T-dawg is a lot like me, curious and excited about everything to distraction.

Excited is an understatement, though. In the morning, when I’m dressed and about to head downstairs for our morning walk, T-dawg will just about fly down the stairs to the first landing, loop around several times, then throw himself down the rest of the stairs. I don’t think his feet even really touch the steps.

At the bottom of the stairs, he loops around several times again, grabbing toys and flinging them out into space, then tearing off for the kitchen. It’s quite a hilarious routine and makes me laugh every time.

He races through the kitchen and leaps over the two steps to the sunroom, skidding to a stop on the tile. The skid happens so often that I seriously considered changing his name to Skid when he first arrived.

He’s so beside himself at the joy of a walk that he rapidly pads up and down the final flight of four steps to the back door about a half dozen times before we leave, making it nearly impossible to get his harness on and lead attached.

Lately, he’s taken to eating the new grass that’s appeared along the edges of the yards we pass. My last dog did this so much that I thought she might be part goat, and apparently T-dawg has the same genes. It’s a little embarrassing to be lingering at the edge of a strange yard for long periods of time, since grazing is a very slow process. So far, though, no one has called me on it.

One night it was warm enough to sleep with the window open, and a thunderstorm was on the way, so I went to bed very excited, because I love storms and really miss them in the wintertime.

Sure enough, about 1:30 a.m., I awoke to a flickering light, the lightning before the storm. I smiled, watched for a while, and then fell back to sleep for a bit. When I opened my eyes again, the rain was coming down, and the thunder had gotten louder, the lightning more frequent. What I saw though, really surprised me.

There was T-dawg, sitting by the window, looking up at the sky with great interest. He wasn’t afraid at all, just really curious about the whole moment. In fact, after a few minutes, he really surprised me and laid down right beneath the open window, which he has never done.

“Wow,” I thought, “a dog that likes thunderstorms!”

And that’s not all he likes about spring.

We visit the dog park every now and then, although most people avoid it during this time because there’s a very large puddle at the top of the park, and dogs seem to be drawn to it.

I like to think that a dirty dog is a happy dog, so I let him enjoy the puddle. Besides, he really doesn’t seem to get very muddy, and wet is easily solved with a towel.

The first time he enjoyed the puddle, he strode right in up to his chest and took a drink. I think he was surprised how deep the puddle was, but he was good with it. He ran in and out of the puddle in large circles, having a grand old time. Occasionally he would tear off across the wet field to another puddle he had discovered, splashing up water in his wake. He looked like he was having an absolute ball!

One day, as he was celebrating the puddle, another dog came along. A water breed, no less. This dog presented himself to T-dawg and then simply plopped into the water, almost immersing himself.

T-dawg looked at the other dog like he had three heads, but I could see him also considering that full immersion might be something he’d like to try. They played back and forth, in and out of the puddle, each time the other dog flopping into the water when he’d stop.

I held my breath each time, but T-dawg thought better of it. Water up to his chest was just fine and dandy. For now.

Here’s hoping that spring makes you feel as happy as two dogs playing in a puddle!